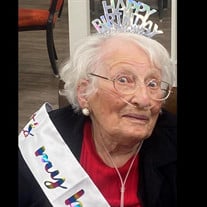 Gertrude B. Stern, Kansas’s oldest living resident, died April 11 at the age of 112. She was born in 1910, Sioux City, IA, before the invention of the modern radio and only several years after Wilbur Wright’s first flight. As a child, she watched WWI soldiers muster in a downtown city park, and sold them water for a penny a cup. She moved to KC around 1913. Her parents were tailors, emigrants from White Russia. The family made a good life in a new land. Gertrude attended high school in Kansas City. She worked as a cashier, then milliner in downtown KC. Her father’s tailor shop was at 19th & Main. She met her husband Morris at a progressive dinner party. They married in 1933, honeymooning in Estes Park CO, staying at rustic Honeymoon Cabin at McCreery Ranch. She later told Morris that the next time they came to Estes, the place where they stay would have to have running water! She lived for 67 years in Countryside, now Mission. The mother of three children, Neuman (now deceased), Philip of Allenspark, CO, and Jaclyn Beaulieu of Overland Park. She is a long time member of The Temple, Congregation B’nai Jehudah. She sewed for many years at the Village Church in Prairie Village, and volunteered for so many years at Red Cross that they ran out of awards to give her. She and Morris were avid Shriners with the Ararat Temple. Gertrude loved being a member of the Shrine’s Casbah Darlings. Asked her secret of the long and fulfilling life she lead, she credited vitamins and the ability to release stress and focus on the positive, often reading Danielle Steele romance novels. She was a marvelous mother, grandmother and great grandmother to her extended family. She’ll be remembered for her strength, courage, drive and independence. In lieu of flowers, in her honor, participate in world peace! Graveside services will be held at 12:00pm Noon (CST), Tuesday, April 12, 2022 at Rose Hill Cemetery, 6900 Troost Ave, Kansas City, MO 64131. If you would like to join by zoom, please email [email protected] for link and passcode.

Gertrude B. Stern, Kansas&#8217;s oldest living resident, died April 11 at the age of 112. She was born in 1910, Sioux City, IA, before the invention of the modern radio and only several years after Wilbur Wright&#8217;s first flight. As a child,... View Obituary & Service Information

The family of Gertrude Bertha Stern created this Life Tributes page to make it easy to share your memories.