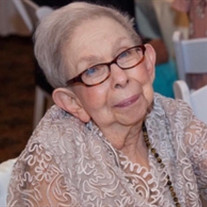 Gertrud “DeeDee” Dale, 87, of Overland Park, died Thursday, March 28, 2019. Graveside funeral services will be held at 11 a.m. Monday, April 22, at Rose Hill Cemetery, 6900 Troost Ave., Kansas City, MO. Kindly omit flowers; the family suggests contributions to the United States Holocaust Memorial Museum, Harvesters, the Arthritis Foundation, or a charity of choice. DeeDee was born Jan. 25, 1932, to Sidney and Gertrud Berkowitz in Kansas City, Missouri. She graduated from Southwest High School and received a B.A. in Political Science from Smith College in 1953. She married Peter Dale in 1953 and celebrated a 50-year marriage before his death in 2004. She was a lifelong Kansas City area resident. DeeDee was an application engineer for The Marley Cooling Tower Company until she retired in 1988. She also prepared taxes for H & R Block, and was the bookkeeper for the family business, Milwaukee Delicatessen. She was a member of The Temple, Congregation B’nai Jehudah, the National Council of Jewish Women, the Council Study Group, and the Smith College Alumni Association. DeeDee was an avid reader, a life master bridge player and loved to travel, taking many cruises with her husband. She appeared on “Jeopardy” in 1965, not winning but thoroughly enjoying the experience. As her grandson said, she was typically both the shortest and smartest person in the room. DeeDee is survived by her sister, Joe Ann Kratchman (Arnie), her daughters Carol Dale (Barney Mayse) and Celia Richey, all of Overland Park, as well as her cherished grandchildren Joshua Richey (Savannah) of Atlanta, Daniel Richey of Boston, and Samantha Cabrera (Brian) of Denver. The family would like to thank her caregivers from Seniors Helping Seniors for all their help and Dr. Donald Cohen for his wonderful care.

The family of Getrud "DeeDee" Dale created this Life Tributes page to make it easy to share your memories.