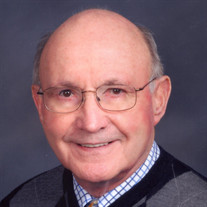 Gilbert Joseph Kahn, 90, died peacefully on Wednesday, December 17th, 2014 at Village Shalom. Funeral services will be 3:00pm Thursday, December 18, at The Louis Memorial Chapel, 6830 Troost Avenue, Kansas City, MO, with burial to follow at Rose Hill Cemetery. In lieu of flowers, the family suggests contributions to Village Shalom or Kansas City Hospice and Palliative Care. Beloved husband, father, and grandfather, he was born on January 1st, 1924, in Kansas City, the son of immigrants from Lithuania, Sarah and Samuel Kahn. The youngest of 6 siblings, he was a natural businessman; he purchased his first building when he was 13, and worked in the family grocery business until joining the Navy in 1943. After being chosen for the Officer’s Training Program, he was sent to college in Warrensburg, Missouri and later, to Notre Dame University. He returned to Kansas City as owner/manager of Kahn’s Market at 18th and Brooklyn, where he continued to hone his business savvy. In 1951, he married Rita Ann Horwitz, whom he loved and cherished until the day he died. In 1961, he struck out on his own and founded his first general contracting company, Callegari Kahn. In 1973, he established Morton-Kahn Construction Company, which eventually became the 12th largest company of its kind in Kansas City. He retired in 1985. Throughout the years, he enjoyed keeping physically fit; he was a gymnast in high school and college, a weight-lifter, an aerial darts and tennis player, a golfer, a horseback rider, and a swimmer. He was a lover of talent, and enjoyed everything from Frank Sinatra to Broadway shows to American Idol. He also loved to dance with his wife, Rita. A raconteur, he enjoyed regaling friends and strangers alike with tales of his family schemes and business deals. He always had a twinkle in his eye (but it could quickly disappear when someone disagreed with him!) He could be gruff, but could also be a teddy bear. Later in life, he took great pride in getting to know his children and to appreciate how much they, and Rita, meant to him. Gilbert Kahn was preceded in death by his sister, Rose Kahn, and brothers, Louis, Tommy, Jack, and Earl. He is survived by his wife of 63 years, Rita Ann, his son Stuart (Elvira), daughter Sarilee (David Singer) and granddaughters, Ariel and Nicole. The family is grateful to Village Shalom and Kansas City Hospice for their care, kindness, and comfort. May he rest in peace.

The family of Gilbert Joseph Kahn created this Life Tributes page to make it easy to share your memories.