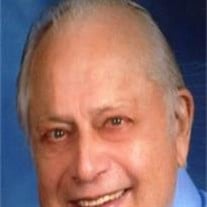 Loving husband, father, grandfather, and teacher, Rabbi Gilbert Lewis Shoham, 81, of Overland Park, passed away April 20, 2012 at the Mid-America Specialty Hospital in Overland Park. Funeral services will be at 3:00 pm Sunday, April 22 at the Louis Memorial Chapel, 6830 Troost Avenue, Kansas City, MO. Burial will be in Eden Memorial Park, Mission Hills, California. In lieu of flowers, please send donations to Congregation BIAV, 9900 Antioch, Overland Park, Kansas 66212, or the philanthropy of your choice. Gil graduated from the Talmudical Academy, Baltimore: He earned B.A. in chemistry from Yeshiva College, New York; ordination from Yeshiva University, New York; an M.A. in the philosophy of religion from McGill University, Montreal; a PhD in philosophy from the University of Southern California; and an M.B.A. from Rockhurst College, Kansas City. Gil was a dynamic and charismatic leader who founded the Shaar Zedek Congregation and the Emek Hebrew Academy in Los Angeles at a time when there were no such Jewish orthodox institutions in the valley. He also served the pulpits of Congregation Beth Hamedrash Hagadol in Montreal, and Kehiliath Israel Synagogue in Kansas City. He served as president of the Rabbinic Council of Southern California, vice president of the Greater Kansas City Chamber of Commerce, and adjunct professor of philosophy at the University of Missouri at Kansas City and at Rockhurst University in Kansas City. He was a member of the Rabbinic Council of America and the Rabbinic Association of Greater Kansas City. Gil authored A Quest for Clarity in Religious Thought: A Case Against Fundamentalism, Dorrance, 2006, as well as articles in Jewish Education, The Reconstructionist, Horizon, and the Kansas City Jewish Chronicle. His father and both grandfathers were rabbis schooled in the yeshiva of Slobotka, Lithuania, for centuries the intellectual capital of Eastern European Jewry. His mentor at Yeshiva University was Rabbi Joseph Soloveitchik , arguably the greatest Jewish mind of the twentieth century. He understood and appreciated the pragmatic and humane aspects of Jewish law and was dismayed by and never succumbed to the politicized, non-intellectual turn to the right that captured much of all three Abrahamic religions during the last decades of his life. Gil felt fortunate to have the love of two good women, Dorothy Cohen Shoham, to whom he was married for forty-seven years, and Sharon Lowenstein Shoham, to whom he was married for ten years. He took great pride in his daughter’s, son’s and grandson’s accomplishments and great joy in his infant foster granddaughter. Physically as well as mentally strong, he survived “terminal” lung cancer in his forties and accepted recent disabilities with humor and grace. Gil was preceded in death by his parents, Rabbi Jehiel Ber Shoham and Ethel Marcus Shoham, and by his first wife. He is survived by his second wife; his children, Dr. Steven (Susie) Shoham, Los Angeles, and Cynthia Shoham Follick (Joshua), Omaha; four Lowenstein sons: Lon (Cathy), Kansas City; Glenn (Nicole), Houston; John (Amy), Chicago; and Reed (Melanie Hanan), London; three grandchildren in Los Angeles, Daniel Shoham, Deuce Janisch and Stella Tolentino; one foster granddaughter in Omaha; twelve Lowenstein grandchildren; siblings Rabbi Sydney and Jewel Shoham, Montreal; Jake Shoham, Los Angeles; and Faye Mishkin, Brooklyn, NY; his first wife’s siblings, Jerry and Jean Cohen Friedman, Los Angeles; Abraham and Hazel Cohen, Montreal; and Esther Cohen and Barry Schwartz, Montreal; and numerous nieces and nephews and great nieces and nephews.

The family of Gilbert Shoham created this Life Tributes page to make it easy to share your memories.