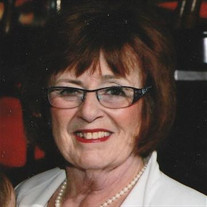 Gitta Cahn Azorsky, passed away on Monday, June 3rd at Menorah Medical Center. Funeral services will be at 11:00 am Wednesday, June 5, 2019 at The Louis Memorial Chapel with burial to follow at Mt. Carmel Cemetery. For those wishing to honor her memory, in lieu of flowers, the family suggests contributions to Congregation Beth Shalom or Village Shalom. Gitta is survived by her son and daughter-in-law Steve and Diane Azorsky, daughter and son-in-law Debbie and David Kalmeyer, grandchildren Josh and Rose Azorsky and Jonathon Kalmeyer, sister Helen Farbman, brother-in-law and sister-in-law, Gloria and Mickey Azorsky and many nieces, nephews and good friends. Gitta was preceded in death by her husband Marvin Azorsky, sister-in-law Harriet Azorsky, and parents Herman and Elisabeth (Mayer) Cahn. Gitta was born in Shanghai, China on July 3, 1940. Her first 7 years were spent in the Jewish ghetto with thousands of other European refugees. She lived in one room with her Oma, Opa, Mother, Father and younger sister. Thanks to the sponsorship of a local preacher her family finally settled in Kansas City in 1948. As a young girl, Gitta was active in Young Judea and dreamed of becoming a nurse. While she chose marriage and family instead, she was very proud of her days as a candy striper at St. Mary’s Hospital and Cerebral Palsy Center. In 1959 Gitta married Marvin Azorsky and they spent the next 49 years working side-by-side at Harry’s Factory Outlet in Riverside, MO, putting family first, nurturing beautiful friendships and traveling the world. She was a life board member of Beth Shalom Sisterhood, a member of ORT, Hadassah and was active in Beth Shalom’s couple’s club. Gitta had an artistic eye and a keen sense of fashion. She loved to knit, crochet, paint and needlepoint. Her creative talents extended into the kitchen and entertaining, as well. She was an excellent cook and baker and always set a beautiful table for holidays and family gatherings. Gitta will be missed not only by her family, but her close friends with whom she shared genuine love, laughter, trust and affection. The family would like to extend their appreciation to Gitta’s doctors, especially Jonathan Jacobs and Dan Toubes; to the kind and caring staff of Village Shalom, especially Kim Krouse, Mady Drosenos, Jill Craft and Christine Lawson; and, to the thoughtful and caring doctors and nurses at Menorah Medical Center.

Gitta Cahn Azorsky, passed away on Monday, June 3rd at Menorah Medical Center. Funeral services will be at 11:00 am Wednesday, June 5, 2019 at The Louis Memorial Chapel with burial to follow at Mt. Carmel Cemetery. For those wishing to honor... View Obituary & Service Information

The family of Gitta Cahn Azorsky created this Life Tributes page to make it easy to share your memories.