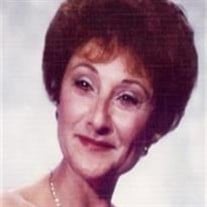 Gloria Asner, 80, of Leawood, KS passed away Sunday, November 15, 2009 at St. Luke’s South. Funeral services 1:00pm Tuesday, November 17, at The Louis Memorial Chapel, 6830 Troost Ave. Burial at Sheffield Cemetery. Kindly omit flowers, the family suggests contributions to Ohev Sholom Synagogue or the Alzheimer’s Association. Gloria was born in Big Spring, TX and grew up in Borger, TX. She attended William Jewell College in Liberty, MO. While in school in Liberty, she met her future husband, Labe. Gloria returned to Texas after one year of school, to continue her education closer to home. After one more year of school, she married Labe Asner in 1948 in Amarillo, TX, at which time they returned together to the Kansas City area. Gloria was a long time member of Congregation Ohev Sholom and was a member and past president of its Sisterhood. She was a life member of Hadassah and was a past president of the local chapter. Gloria was a member of the National Council of Jewish Women, Brandeis University Women’s Committee, B’nai B’rith and the Jewish Community Center. She was a long time Docent at the Nelson Atkins Museum of Art. Gloria was a volunteer presenter for Dolls for Democracy, a program directed at prejudice awareness. She will be remembered for her beautiful voice which she shared at many weddings and local productions. Gloria was preceded in death by her parents, Sigmund and Minnie Anisman. She is survived by her husband of 61 years, Labe Asner, of the home; son and daughter-in-law: Scott and Susan Asner, Highland Beach, FL; daughters and son-in-law: Lisa and Buzzah Feingold, Prairie Village, KS; Marci Asner, Jamestown, CO; grandchildren and their spouses: Lindsay Asner Peterson and her husband Matt, Darby Asner, Zachary and Jessica Feingold, Emily and Carly Feingold; great-grandchildren: Sadie Feingold and Luke Asner Peterson. The family wishes to express their loving thanks to Brenda Murray and her staff for their kindness and care given to Gloria as well as the staff at St. Luke’s South. Gloria was a perfect lady and will be missed by all.

The family of Gloria Asner created this Life Tributes page to make it easy to share your memories.