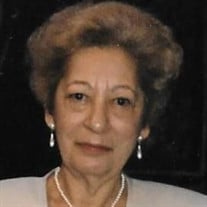 Gloria Ruth Waxman Fish died February 8, 2022, at Sunrise of Leawood, following a 14-year battle with Alzheimer’s. She was 90. A Kansas City native, Gloria was born March 4, 1931, to Harold and Florence (Lieberman) Waxman. Gloria graduated from Paseo High School and then attended Kansas City University, which later became known as the University of Missouri -Kansas City. Gloria married Leon Fish on December 24, 1950, at Congregation Beth Shalom, and they were married 54 years. Gloria was a devoted wife and mother. After her children began school, Gloria worked as a lunch monitor at South City View Elementary School. In search of a challenge, Gloria enrolled in tax preparation classes which led to a 30-year career at H&R Block. She began as a tax preparer and then advanced to work in the Executive Tax Service office. She taught advanced tax classes and was an enrolled agent. Gloria juggled her professional career while also serving as a caregiver to her husband Leon after his diagnosis of Parkinson’s disease. Gloria was a talented artist, poet, and author. She gave her first violin recital at age 4 and played piano from the time she was a young child until recent years. She took art classes at the Nelson-Atkins Museum of Art, assisted friends with setting up displays at the Plaza Art Fair and in 2012 had her watercolor painting selected to be auctioned at the Alzheimer’s Association Annual Fundraiser. She had a passion for the theater and was a long-time season ticket holder with KC Theater League. Her favorite production was Les Misérables. Gloria also enjoyed knitting, which her mother taught her at a young age. She would knit and donate hats to the homeless in the winter. She liked to play Mah Jongg, Scrabble, poker, and bridge. Gloria was an avid reader and found pleasure in perusing books at the Red Bridge library, shelf by shelf, and reading everything she could find about the British Royalty. She enjoyed creative writing and wrote articles that were published in the Wednesday Magazine and Boys’ Life. As a loyal baseball fan, Gloria seldom missed her sons’ youth baseball games and could be found rooting for the Kansas City A’s and Royals, whether attending the games in person or listening on her radio. Several pieces of memorabilia she owned have been donated to the Royal’s Hall of Fame where they are on display. Gloria and Leon were founding members of the former Temple Beth El and later returned to Congregation Beth Shalom, where she remained a member until her passing. Gloria and Leon’s children became B’nai Mitzvah and were confirmed at Beth Shalom. Gloria is survived by her three children, Jennifer Fish, Joel Fish (Annette) and Douglas Fish (Fanny), 5 adoring grandchildren, Cara Schiff (Mike), Bryan Fish, Amber Hazard, Lenore Fish (Dakota Fry) and Opal Fish, and great grandson, Jacob Schiff and her brother, Dr. Herbert Waxman (Cheryl). The family wishes to thank Sunrise of Leawood and Kansas City Hospice for their loving care and support. In lieu of flowers, donations can be kindly made to the Michael J Fox Parkinson’s Foundation (P.O. Box 5014 Hagerstown, MD 21741-5014), the Alzheimer’s Association (Heart of America Chapter, 3846 W 75 St, Prairie Village KS 66208), Kansas City Hospice (9001 Stateline Road, Suite 300, Kansas City, MO 64114), or a charity of one’s choice. A graveside service will be held on Thursday, February 10, 2:30 pm at Mt. Carmel Cemetery. Masks are required. Email [email protected] for the zoom link and passcode. SHIVA INFORMATION: Thursday Zoom Shiva: February 9, 2022 at 6:00pm Beth Shalom Minyan https://us02web.zoom.us/j/549231114?pwd=UmFld2NwY3U4TVdOSkhRcjBOQjlxZz09 Saturday Zoom Shiva: February 12, 2022 at 7:00pm Family and friends will have an opportunity to visit with the Fish family https://us02web.zoom.us/j/84274387252?pwd=a0dPWUk5ZHE4U1ZUTnlOVFc1c3hDUT09

The family of Gloria Ruth Waxman Fish created this Life Tributes page to make it easy to share your memories.