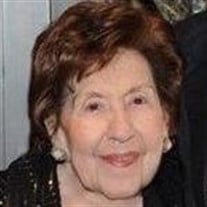 Grace Ginsberg Ernstein presently of Houston,Texas, previously of Overland Park, Kansas, passed away peacefully on March, 17, 2016, after living 94 full years of life. Predeceased in death by her parents Anna and David Ginsberg, brothers, Al Ginsberg and Meyer Ginsberg, sisters, Helen Kratchman and Lee Weinberg, her beloved husband, David Louis Ernstein and children, Elaine Ernstein Goller and Don Alan Ernstein. Grace and David had an amazing love story that spanned through their brief courtship and engagement in December 1941. Upon marriage in April 1942, the couple was transferred to the US Medical School at Fitsimmon General Hospital in Denver, Colorado. Grace was always beside her man and insisted on accompanying her husband to Camp Berkley in Texas. David and Grace spent almost four years apart. During that time a daughter , Elaine, had been born. When David returned from North Africa, November 6, 1945 he was re united with his beloved wife, Grace, and new daughter Elaine in Kansas City, Missouri where they were both born and raised. Grace and David had three children, Elaine, Don and Scott. In Grace’s younger years she was active in B’nai B’rith. Her family was her life. Not only her husband and children, but her siblings as well. She was a very kind hearted and fun loving person who carried a big stick. Most things were done “her way”. Even when she moved to the Medallion and Seven Acres in Houston, almost three short years ago, the nurses all knew how to handle Grace. Just do it Grace’s way! Anyone that had the honor to know her, loved her. Grace is survived by her son, Scott Ernstein and daughter in law Annette Ernstein, grandson Drew Ernstein and wife Sandra and grandson Kenneth Ernstein , all of Houston, Texas, sister Shirley Novorr of Leawood, Kansas, and numerous nieces and nephews. Grace always loved being by her husband’s side and adored her three children. She had a quick wit, spunk and family always came first. Burial will take place graveside on Sunday, March 20th at 3:00pm at Kehilath Israel Blue Ridge Cemetery in Kansas City, Missouri. Donations to a charity of one’s choice or Seven Acres Jewish Senior Care Services 6200 N Braeswood Houston, Texas 77074.

The family of GRACE GINSBERG ERNSTEIN created this Life Tributes page to make it easy to share your memories.