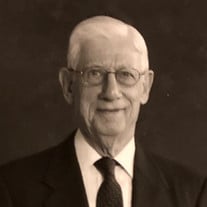 Gustave Eisemann, M.D., age 93, of Mission Hills, Kansas, died May 26, 2019. Funeral services will be 10:30 am, Tuesday, May 28, 2019 at The Louis Memorial Chapel, 6830 Troost Avenue, Kansas City, MO 64131. Burial to follow at Mt. Carmel Cemetery. Dr. Eisemann was born in Halberstadt, Germany in 1926 and came to the United States in 1938. He was a graduate of Westport High School, Kansas City, Missouri; Kansas City Junior College, and the University of Kansas School of Medicine in 1948. His postgraduate training included an internship at Beth Israel Hospital in Newark, N.J., a two-year residency in Medicine at The University of Kansas, and a Hematology Fellowship at the New England Medical Center in Boston, Massachusetts from 1953 to 1954. He was a Captain and Flight Surgeon in the U.S. Air Force from 1949-1951, serving in Korea. He was a partner in the Statland Clinic from 1954 until 2004. After retirement he was a volunteer physician at the Health Partnership Clinic of Johnson County. He was a past president and honorary member of the Menorah Medical Center Medical Staff, a past member of the staff of Research Medical Center, an honorary member of the staff of St. Joseph Medical Center, and a consultant in hematology for forty years at the Kansas City V.A. Hospital. He was a Clinical Professor of Medicine at K.U. Medical Center, a member of AOA Honorary Medical Society, a Board Certified Internist, a fellow of the American College of Physicians, and a fellow of the American and International Societies of Hematology. He was a past president of Congregation Beth Shalom and its Foundation, a past member of the Board of Directors of Menorah Medical Center. He was a Founding member of the Jewish Heritage Foundation, an honorary member of the Menorah Legacy Foundation and the first recipient of its Legacy Award. He was also a past member of the Board of Directors of Health Midwest. He was preceded in death by his parents Karl and Irene Eisemann, and his two sisters. He is survived by his wife of 64 years, Elinor, by his sons Joel and his wife Maggie, Potomac, Maryland, Mark and his wife Leslie Mark, Mission Hills, Kansas and Dr. Allan and his wife Dr. Marisa, Dorset, Vermont, and 8 grandchildren. Kindly omit flowers. The family suggests contributions to the Hyman Brand Hebrew Academy, 5801 West 115th Street, Overland Park, KS. 66211 or a charity of your choice.

The family of Gustave Eisemann, M.D. created this Life Tributes page to make it easy to share your memories.