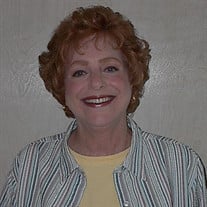 Sue Stonefield, daughter of Belle and Morris Boxerbaum, was born Sept 16, 1937 in Cleveland, Ohio and passed away quietly at Menorah Medical Center in Overland Park, Kansas surrounded by family and friends on November 26th from complications due to pneumonia. A lifelong educator, Sue received her Bachelor of Arts degree in English and Reading from Case Western Reserve University and her Master’s Degree in Reading and English Special Education from the University of Missouri at Kansas City. She spent her entire career in the Shawnee Mission School District, first as an English and Reading teacher at Broadmoor Junior High and then later as a Reading Specialist Educator at Shawnee Mission East High School where she created her legacy curriculum of Reading for the College Bound providing a special boost to students moving onto higher education. After her retirement from education Sue, an avid reader, hosted book clubs with her friends and in latter years became the volunteer librarian at Village Shalom until her deteriorating health forced her to be less active. Still she remained active even starting a book club at her most recent home Lamar Court. Sue was also an active member of the sisterhood at B’nai Jehudah congregation. A woman of many names, she was known as “Susie” by her parents and two sisters, Ina Burday and Nancy Socoloff. To her daughter Marcy and son Peter she was simply “mom” or at times “mother.” Sue’s five grandchildren know her as “Mema,” a name bestowed upon her by her eldest granddaughter, Tamara, when she could not say Grandma, and everyone else simply called her “Sue.” Many of us know that Sue’s real first name was Harriet which she hated and that followed her throughout her life, on school rosters and in doctor’s offices and was even, briefly, used by her nurse at the end. Sue would always politely let them know that she was “Sue,” just Sue. A single mom before single moms were the norm they are now, Sue was proudest of all for her family. She leaves behind her sisters: Ina Burday and Nancy Socoloff; daughter, Marcy Gaynes (partner Scott Nemeth) and son, Peter Stonefield (wife Anna); her beloved grandchildren: Tamara Lemieux (husband Max), Morgan Stonefield, Shari Gaynes, William Stonefield and Cameron Stonefield. Sue also, albeit too briefly, welcomed into this world her great-granddaughter Sydney Lemieux, who was only 10 days old when Sue quietly moved on. Services will be held at The Louis Memorial Chapel, 6830 Troost Ave in Kansas City, Missouri on Friday, November 30th at noon. Shiva will be at the home of Marcy Gaynes, immediately after the funeral Friday; Saturday evening at 7PM and those wishing to express their condolences may also drop in Sunday between 12-3 PM, please call the funeral home for further information. The family asks that in lieu of flowers you make a donation to the Temple, Congregation B’nai Jehudah or the Education Charity or Library of your choice.

Sue Stonefield, daughter of Belle and Morris Boxerbaum, was born Sept 16, 1937 in Cleveland, Ohio and passed away quietly at Menorah Medical Center in Overland Park, Kansas surrounded by family and friends on November 26th from complications... View Obituary & Service Information

The family of H. (Harriet) Sue Stonefield created this Life Tributes page to make it easy to share your memories.

Sue Stonefield, daughter of Belle and Morris Boxerbaum, was born...