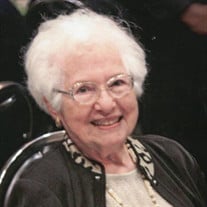 Hanorah Goldenberg, 94, of Kansas City, Missouri passed away peacefully at her home on Wednesday, August 22, 2018. Services will be held on Friday, August 24, 2018 at 1:00 pm at the Yukon Chapel at Mt. Carmel Cemetery, 5529 Ditzler, Raytown, MO 64133. In lieu of flowers, the family suggests memorial contributions to the Kidney Foundation or a charity of one’s choice. Hanorah was born on December 10, 1923 in St. Joseph, MO to the late Henry and Sarah Wienstock. She graduated from Central High School in St. Joseph and went on to attend Platte-Gard Business School, where she got the basis for her future careers. After business school, Hanorah moved to Chicago where she met her husband, Arthur Goldenberg, and in 1947 they were married. In 1949, they moved to Kansas City, MO from Chicago and lived happily together until Arthur’s passing in 1993. Hanorah remained in the home that she had lived in for 50 years and worked right up until her passing. In their years together, Hanorah helped her husband operate Gold’s Furniture in the Waldo area from 1963 until 1986. For the last 14 years, she worked at Krigel & Krigel Law Firm, driving herself to work four days a week. Hanorah was a member of Beth Shalom Synagogue as well as the Beth Shalom Sisterhood. She also was a past member of Marcella Rodin and a very active member of the PTA of Boone School. In addition to her parents and husband, Hanorah was preceded in death by her son, Rabbi Barry Goldenberg; brother, Cecil Wienstock and sisters, Esther Cohen and Bernice Weiner. Those left to cherish her memory include her daughters: Annette (Randy) Haynes of Belton, MO, Susan (Mark) Wolf of Chesterfield, MO; daughter-in-law, Lori Goldenberg of Chicago; grandchildren: Amy & Thomas Falke, Bayla & Akiva Berkowitz, Dena & Yitzhak Kagan, Steve Wolf, Yonatan & Ettie Goldenberg, Aaron & Kayla Haynes, Michal & Shiah Perecman and Elisheva & Yehuda Katz; 24 great-grandchildren as well as many beloved nieces, nephews and extended family members.

Hanorah Goldenberg, 94, of Kansas City, Missouri passed away peacefully at her home on Wednesday, August 22, 2018. Services will be held on Friday, August 24, 2018 at 1:00 pm at the Yukon Chapel at Mt. Carmel Cemetery, 5529 Ditzler, Raytown,... View Obituary & Service Information

The family of HANORAH (WIENSTOCK) GOLDENBERG created this Life Tributes page to make it easy to share your memories.