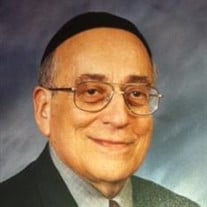 Harold L. Esrig, 86, of Leawood, KS, passed away Thursday, December 29, 2016 at the Kansas City Hospice House. Funeral services will be 10:00am Monday, January 2, 2017 at The Louis Memorial Chapel, 6830 Troost Avenue, Kansas City, MO with burial to follow at Sheffield Cemetery. In lieu of flowers, the family suggests contributions to a charity of one’s choice. Dr. Esrig was born and raised in Kansas City, MO and was a lifelong area resident. He graduated Central High School in 1947 and served as a First Lieutenant in the National Guard. Dr. Esrig held degrees in Biology, Chemistry and graduated from Pharmacy school. He started his career as a Pharmacist, then returned to school to become an Anesthesiologist, where he enjoyed his career at Providence St. Margaret’s Hospital for over 20 years, before his retirement in 1990. Dr. Esrig was a past president of the Wyandotte Medical Society and was a past secretary of the KC Society of Anesthesiology. Since his retirement, he was an active member of the ROMEO’S and was an avid reader of mysteries. Dr. Esrig was a very devoted son, husband, father, grandfather and brother. He was preceded in death by his parents, Joseph and Alice (Miller) Esrig and his wife of 52 years, Judith Esrig in 2012. He is survived by his son and daughter-in-law: Jerry and Marcia Esrig; his daughter and son-in-law: Lorraine and Jon Hirsch; his sister: Ruth Brinn and his grandchildren: Yossi Esrig (Hodaya), Tova Twersky (Meshulam), Devorah Reiner (Yair), Sara Bilmes (Eli) and 11 great-grandchildren; nephews and cousins also survive.

The family of HAROLD L. ESRIG created this Life Tributes page to make it easy to share your memories.