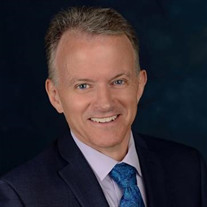 On Sunday, October 21st, 2018, Hal Agron, a loving husband and father of two, passed away at the age of 58. He was born in Kansas City, Missouri on September 8th, 1960. He received his undergraduate degree from UT Austin in 1983 and received his law degree from South Texas College of Law in 1986. In 1991, he married his childhood friend and new love, Ruth Haber, and together they raised two children, Nicole and Jack. Growing up in Overland Park Kansas, Hal was active in BBYO, USY, the Shawnee Mission South Marching Band and DECA. One of his proudest accomplishments was becoming an Eagle Scout with his lifelong friends. As an attorney, Hal began his career in Montgomery County, Texas as a Criminal Prosecutor. He later became a Civil Prosecutor for the county, a job which he loved and at which he excelled. Hal was passionate about many things, but mostly passionate about people and the friendships he developed and maintained throughout his life. In recent years, he became an avid cycling enthusiast and was proud to have participated in two MS150 events. Although diagnosed with MS over 20 years ago, it was determined that he suffered from a rare form of dementia which ultimately took his life. An attorney who did not fit the stereotypical mold, Hal had an excellent sense of humor, a gentle demeanor, and a warm spirit. He made every room brighter with his presence and his uncanny ability to see the humor in every situation. We are lucky to have had him in our lives, though his time here was much too short. We will miss the Hal we knew, a man of good humor, a kind heart, and a knack for making us laugh. Although he is no longer with us in the physical sense, we know that his spirit is free and his pain is over. He leaves behind his wife Ruth, his children Nicole and Jack, brothers Ron and Michael, sister Susan Murphy (Mike) sister-in-law Doris Mendel (Bill), in-laws Eddie and Magda Haber and many amazing nieces, nephews and cousins whom he adored. Funeral services will be held at 11:30am Thursday, October 25, 2018 at Louis Memorial Chapel, 6830 Troost Ave, Kansas City, MO. Interment will be at Kehilath Israel Blue Ridge Cemetery, Independence, MO. In lieu of flowers, memorial contributions may be made to CADASIL Research foundation, www.cadasilfoundation.org. He will be missed.

On Sunday, October 21st, 2018, Hal Agron, a loving husband and father of two, passed away at the age of 58. He was born in Kansas City, Missouri on September 8th, 1960. He received his undergraduate degree from UT Austin in 1983 and received... View Obituary & Service Information

The family of HAROLD "HAL" DAVID AGRON created this Life Tributes page to make it easy to share your memories.