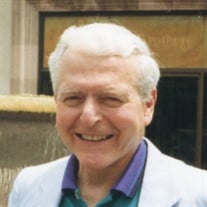 HAROLD NORMAN HURST July 6, 1924 – May 11, 2014 Harold N. “Hal” Hurst, 89, of Prairie Village, KS, passed away on May 11th, following a brief stay at the Kansas City Hospice House. Harold was born to Morris P. and Ruth L. (Gardenschwartz) Hurst in Kansas City, MO. He lived his entire life in the K.C. area, graduating from Southwest High School where he was a member of the R.O.T.C. program. Even though he was a self-professed “non-swimmer”, Hal enlisted in the U.S. Navy and, after basic training, he was sent to the ’90 Day Wonder” school at Cornell University in Ithaca, NY, graduating as a Lieutenant. Hal trained on a ship in Newport, RI and was shipped out to the South Pacific where he served for four years on the USS Sitka, a Troop Transport, during WWII. He was in charge of landing craft that delivered Army and Marine troops to the beaches in Okinawa, Saipan, Simian and troops to French Indochina. Following his military service, he completed his education earning a Bachelor of Science degree at the Kansas City University (now UMKC) specializing in Kinesiology, the study of muscle function and movement. Soon after the war, Harold met the love of his life, Phyllis D. Shaw, and they were married in 1948. Not long after his marriage to Phyllis, he began working for his father in the family business, Hurst Jewelry & Loan Co., one of several Pawn Shops that flourished in the downtown K.C. area at that time. The business required that he become a quick study of both people and merchandise. He became noted for his eclectic knowledge of a variety of merchandise from diamonds to antiques and musical instruments. Harold was ahead of his time when it came to understanding the importance of exercising and its relationship to general wellbeing and spirituality. He took his exercise hobby and expanded a small section the “The Store” to include weights and weight training equipment and it soon evolved into Hurst Sporting Goods, Jewelry & Loan. His sage advice on weight training drew enthusiasts from all over the Midwest including champion bodybuilders and Olympic caliber Power Lifters. He provided the first iron barbells and lifting benches to many of the Big 8 college programs as well as the Kansas City Chiefs in the 1960’s. Though small in stature, Hal was stronger than most men and continued to lift weights and run, religiously, well into his seventies. Harold and Phyllis were devoted parents to their four children, Steve, Anne and the twins, Susie & Bob. Though the store consumed much of his time, he always found time for his family, who never lacked for his love, wisdom and guidance. Papa, you will be truly missed!!!! He was preceded in death by his parents and his younger brother, Richard. Harold leaves behind his “angel” of a wife of 65 years, Phyllis, their four children: Stephen (Lucy). Anne Jacobs (Mike), Susie Hurst (Dani Sneh), and Robert. Grandchildren: Mindy Parmet (Dr. David), Joe Jacobs, Robyn Freiden (Seth), Jonathan Hurst-Sneh (Shira), Coby Hurst-Sneh, Josh Hurst, Jessica Hurst, Rachel Hurst. Great-grandchildren: Maya Parmet, Justin Parmet, Dylan Freiden and Kara Freiden. He also leaves behind his loving older sister, Dorothy Greenberg, sister-in-law, Radine Shaw and nieces and nephews too numerous to name (though no less loved and cherished). Harold was long time member of the Congregation Ohev Sholom, of which Phyllis’ family were founding members. The family would also like to thank The Kansas City Hospice House and Enhanced Home Care for their wonderful care. And a special thank you to Maranda and Julia for their time and care in making dad’s last weeks much more comfortable and pleasant. In lieu of flowers, contributions can be made to Congregation Ohev Sholom Synagogue, Kansas City Hospice House or to the charity of your choice. Condolences may be left at www.louismemorialchapel.com (Arr: The Louis Memorial Chapel 816-361-5211).

The family of Harold N. Hurst created this Life Tributes page to make it easy to share your memories.