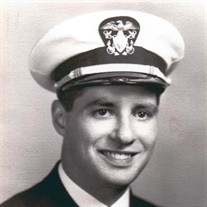 Harold Oppenheim, 96, jeweler and gemologist for over 60 years and a World War II veteran, died on December 31 in Kansas City after a short illness. He was predeceased by his loving wife and best friend for 62 years, Kansas City native Jeane Navran Oppenheim, and by his twin brother Lou and sister Nettie. He is survived by his sisters, Dorothy Markman of Pompano Beach, Florida, and Esther (Eskie) Sheppard of Palm Springs, California; two brothers-in-law, Bob Navran and Roger Navran, both of Overland Park, Kansas; two sons and daughters-in-law, Bill (Lou Radford), of Perthshire, Scotland, and Jim (Robin), of Marietta, Georgia; six grandchildren; one great-grandchild; and by 19 nieces and nephews. A native of Des Moines, Iowa, Harold attended Drake University in Des Moines and joined the United States Navy when World War II broke out. He trained as a gunnery officer and with the rank of Lieutenant saw action in the South Pacific. After the war, he returned to Kansas City and married Jeane Navran in 1946. He went to work for Helzberg Jewelers and with a legacy from Jeane’s mother, bought a jewelry store in Chanute, Kansas. With their two young sons, they then moved to El Dorado and in 1956, to Wichita, where they established a jewelry store at the then-newly developed Parklane Shopping Center. Theirs was one of the first stores to offer wholesale prices to retail customers. Harold also traveled the Midwest, helping to run sales for other jewelers in smaller markets. In 1966 Harold and Jeane moved to North Miami Beach, Florida, where they lived for 40 years, continuing the wholesale-to-retail theme as well as designing and manufacturing jewelry. When he retired from the retail business, Harold became a certified gemologist, providing insurance appraisals for a variety of clients including the Drug Enforcement Agency. They returned to Kansas City in 2006, where Jeane died in 2008. Harold had always been a keen golfer, but when he had to retire from playing, he took a computer course and became proficient on the computer within weeks. In 2010 he answered an ad looking for volunteers to assist with a newsletter for the community at the Sulgrave Regency Condominiums, where he lived, and he edited their monthly newsletter for 4 ½ years. Also a keen student of baseball, he was known for devising amazingly true-to-life baseball games and was among thousands from Kansas City who cheered the Royals’ World Series victory. He also wrote two books, one a memoir of his life with Jeane, and the other a compilation of Letters to the Editor he had written over many years, reflecting his lifelong liberalism and tolerance. Harold lived a full life, leaving behind scores of family members and friends whose lives were incalculably enriched to have known this wonderful man, a true officer and a gentleman. The family wishes to thank Carolyn King for her loving care and companionship.

Harold Oppenheim, 96, jeweler and gemologist for over 60 years and a World War II veteran, died on December 31 in Kansas City after a short illness. He was predeceased by his loving wife and best friend for 62 years, Kansas City native Jeane... View Obituary & Service Information

The family of HAROLD OPPENHEIM created this Life Tributes page to make it easy to share your memories.

Harold Oppenheim, 96, jeweler and gemologist for over 60 years...