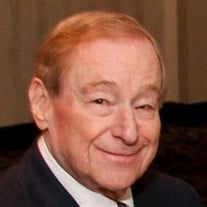 Harry Litman Berlau, 86, of Prairie Village died May 6 at St. Luke's Hospice House in Kansas City, MO. He was born in Kansas City, MO on Sept. 24, 1932, to William Lewis Berlau and Esther Litman Berlau. \He attended William Cullen Bryant Elementary School and graduated from Southwest High School. He graduated the University of Missouri-Columbia in 1953. While there, he served as president of the Zeta Beta Tau fraternity and as president of the Interfraternity Council. Harry was a member of the honorary societies Omicron Delta Kappa, QEBH, Beta Gamma Sigma, and Phi Eta Sigma. He entered the U.S. Army in 1953, proudly serving in Germany and France. Harry received an honorable discharge as a First Lieutenant in 1955. Upon returning to KC, he joined Berlau Paper House, a family-owned business started in 1904. He served for many years as president until he retired in 1990, upon the sale of the company. Harry was active in numerous social, civic, religious, and philanthropic organizations. He is survived by Marcia, his wonderful wife of 51 years; son John Berlau of Alexandria, VA; daughter Nancy and her husband Eric Batdorf of Prairie Village; and his grandchildren -- the lights of his life --Kaitlyn (12) and Carter (10) Batdorf. He was preceded in death by his brother Jack. Funeral services will be at 11:00am Monday, May 13, 2019 at The Louis Memorial Chapel, 6830 Troost Avenue, Kansas City, MO 64131 with burial to follow at Rose Hill Cemetery. Per Harry's request, in lieu of flowers, donations may be made to the Mayo Clinic Department of Development, Harry Berlau Memorial Fund in Honor of Dr. Robert Frye, 200 First St SW, Rochester, MN 55905, or one's charity of choice. The family would like to extend a special thank you to the St. Luke's Hospice House for their wonderful care and compassion.

The family of Harry L. Berlau created this Life Tributes page to make it easy to share your memories.