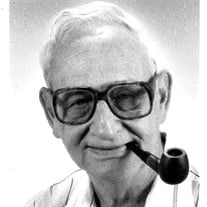 Dr. Harvey F. Fisher, PhD, 94, of Overland Park, KS, passed away Sunday, August 13, 2017 at his home. Graveside services will be 10:00am Wednesday, August 16, 2017, at Rose Hill Cemetery. In lieu of flowers, the family suggests contributions to the V.A. Medical Center. He was born June 22, 1923 in Cleveland, OH, and received his PhD from the University of Chicago in 1952. Dr. Fisher was the Director of the Laboratory of Molecular Bio-Chemistry at the V.A. Medical Center. He retired in June 2017 as Professor Emeritus in the Department of Bio-Chemistry and Molecular Biology at the University of Kansas Medical Center. He loved sailing, and played hockey into his 70’s, which he passed on to his son, Steve. Dr. Fisher was a longtime member of The Temple, Congregation B’nai Jehudah. He served in the U.S. Army during WWII. Dr.. Fisher was preceded in death by his parents and his wife, Camille Fisher in December, 2016. He is survived by his son and daughter-in-law: Steve and Therese Fisher, Overland Park, KS and his grandchildren: Charissa Meyers and husband, Jeff, Courtney Fisher and Tiffany Seymour and husband, Chad.

The family of DR HARVEY F. FISHER PhD created this Life Tributes page to make it easy to share your memories.