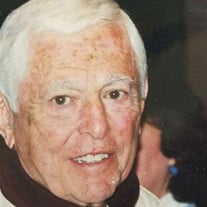 Harvey Fried, 91, of Prairie Village, Kansas, died on Monday, April 30, while surrounded by his loving family. He left this world loved by so many. Born in New York City in 1927 to Joseph and Rea Levine Fried, Harvey led an amazing life. His proudest accomplishments include his 65 year marriage to the love of his life, SuEllen Weissman Fried (married June 29, 1952); his children Jeffrey (Sherry), Paula (Brad), and Marc (Camille); as well as his 7 grandchildren, lovingly referred to as “Miracles.” Harvey graduated from Southwest High School at the age of 16 and headed off to the University of Wisconsin Madison. He paused his education in order to serve in the U.S. Navy at the end of WWII. He served in Hawaii. Harvey returned to graduate from Wisconsin and attended graduate business school at Stanford University. Harvey was known as a man who was dedicated, selfless, and principled. He demonstrated these qualities through his leadership as President of the American Jewish Committee, President of the Historic Garment District Association, co-founder of the Historic Garment District Museum, 30 year CEO of Fried-Siegel, board member of the Jewish Community Relations Bureau, and member of the Advisory Committee for the Dyche Natural History Museum at the University of Kansas. Harvey was passionate about the revival of Downtown Kansas City. His appreciation for Tom McDonnell and Phil Kirk with DST was immeasurable. He served on the Downtown Council’s Board of Directors since 1999. He was an inaugural recipient of the Downtown Council’s Urban Hero Award in 2005. He was a founding board member of the Community Improvement District since 2002. The students at Primitiva Garcia and the Crossroads Academy knew him as Mr. Harvey, the devoted volunteer who visited weekly to practice math and reading. Harvey was instrumental in getting the original building for the Crossroads Charter Schools ready in 2012. In 2016, he moved into the Quality Hills Crossroads Academy with their adoring students and staff. Harvey was also extremely proud of his achievements as a Boy Scout of Troop 61, Eagle Scout, and member of the Tribe of Mic-O-Say. Harvey’s other successes included his involvement with SCORE, the Indian Fields Homes Association, representing Kansas in the Senior Olympics for tennis, and his faithful service as the Executive Administrator of the Watering Hole. Harvey was preceded in death by his parents, his sister Marian Roberts, and Prince Fried (in the words of his brother-in-law, the greatest dog of his or any time). Harvey loved to make others laugh and he brought joy, integrity, and a spirit of service to the lives of those around him. He is remembered by his family as a gentle and caring man who always made sure to let his grandchildren know he loved them dearly and was so proud of them. Quick to make a well-timed joke or witticism, Harvey was committed to supporting the people he loved and making them feel cherished. He cared deeply about family and friends, always looked for the best in others, and lived a life without regrets. His wisdom and practical approach to the world lives on in the lives he has changed and the people who loved him. If you wish to honor Harvey, the family requests donations be made to the Crossroads Charter Schools through the Greater Kansas City Community Foundation. Private family services were held. Interment in Rose Hill Cemetery.

Harvey Fried, 91, of Prairie Village, Kansas, died on Monday, April 30, while surrounded by his loving family. He left this world loved by so many. Born in New York City in 1927 to Joseph and Rea Levine Fried, Harvey led an amazing life. His... View Obituary & Service Information

The family of HARVEY FRIED created this Life Tributes page to make it easy to share your memories.