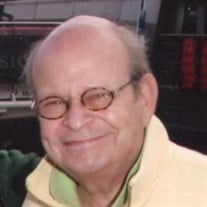 Harvey R. Hyken, 74, passed away Saturday, October 25, 2014, at Menorah Medical Center. Funeral services will be held in the chapel at Kehilath Israel Blue Ridge Cemetery, 10:30am Monday, October 27, followed by burial. Kindly omit flowers; the family suggests contributions to the National Kidney Foundation. Harvey was born in Sedalia, MO, the son of Julius and Melvine (Judd) Hyken. When Harvey was a young child, the family moved to St. Louis, MO. He spent many hours as a teenager working at the fountain in his father’s Star Drug chain. He came to Kansas City to investigate attending the Kansas City Art Institute, where he later earned his degree. It was at that time that he met Linda Levine on a blind date. Although Linda described it as a “terrible date,” she later traveled several times with friends to St. Louis where she encountered Harvey again among the group of friends they visited. Harvey asked Linda if he could call once he moved to Kansas City, and she agreed. After graduating from the Art Institute, he served in the US Army Reserve. He asked Linda to marry him soon after and she eventually became his loving wife of 53 years. Harvey began working in the retail furniture business but eventually became an outside sales representative, representing a number of contemporary furniture and accessory lines. He traveled the Kansas, Missouri, Iowa, and Nebraska territory for more than thirty years until his retirement in 2008. Harvey also earned a reputation as a premier interior designer in Kansas City. He decorated many homes and businesses in the community; including the homes of some of the city’s leading residents. He was a creative artist, participating in many art fairs over the years and several times was commissioned to create collages, his medium of choice, for corporate customers and friends. Harvey also enjoyed refinishing furniture, turning chairs and tables into works of art. He enjoyed music, especially jazz, and had a unique collection of over 100 antique ink wells. Linda and Harvey enjoyed traveling whenever they could, both in the States and abroad. Harvey was always “dressed to the nines,” described by the family as a “clothes horse.” He was active in the community as a volunteer and supporter of many organizations and charities. He was a member of The Temple, Congregation B’nai Jehudah. Although Harvey spent a great deal of time honing a multi facetted career, he never missed an opportunity to be involved in his children’s lives as they grew up. He had a very special relationship with his grandson, Julian Connor, who called Harvey “Ta-Ta.” Harvey was preceded in death by his parents and brother: Barry J. Hyken. He is survived by his beloved wife Linda; sons: Myles Bradlee Hyken, Overland Park, KS and Jason Corey Hyken, Lenexa, KS; daughter: Amy Michelle Hyken, Overland Park, KS; sister: Pamela Auerbach, Lenexa, KS; grandson: Julian Connor Lande. The pallbears: Myles and Jason Hyken, Ed Kanter, Stan Singer, Ronnie Hyken and Mitch Levine.

The family of Harvey R. Hyken created this Life Tributes page to make it easy to share your memories.