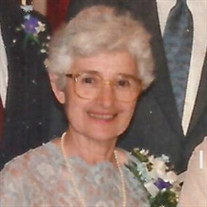 Hedwig "Hedy" Reeds passed away peacefully at Bishop Spencer Place on February 19, 2019 in Kansas City, MO. She was 95. Ms. Reeds was born on March 26, 1923 in Vienna, Austria to Markus and Stella Neumann. She had a large extended family in Austria and Poland, most of whom perished in the Holocaust. She escaped by emigrating to England alone at age fifteen in February 1939. Her parents last wrote to her from Ukraine in 1942. Her brother Otto settled in England, where he practiced medicine. He died in a sailing accident in 1964. Hedy graduated from the University of Michigan with a degree in Russian and earned a master’s degree in German from the University of Kansas in Lawrence. In 1946, she married James Reeds, a Kansas City native who served in the U.S. Army in Europe, where, as part of the Monuments Men, he helped recover art stolen by the Nazis. He received a PhD in linguistics from the University of Michigan. The Reedses settled in Kansas City where they both taught at UMKC for many years. After she retired, Hedy continued to teach German to private students. When Jim became ill, she moved to Bishop Spencer Place to be near him. Hedy’s lifelong passions were classical music and travel. As a girl, she aspired to be a concert pianist. She took pride in playing once at the Schoenbrunn Palace in Vienna. Years later, her piano playing brought joy to the other residents and the staff at Bishop Spencer. Ms. Reeds is survived by her son and daughter in-law, James and Karen Reeds of Princeton, New Jersey; her daughter, Susan Ellman of Milwaukee, Wisconsin; five grandchildren; one great-grandchild; her niece and nephew and their children. She was preceded in death by her husband, James Reeds. Ms. Reeds was buried by her husband’s side in a private ceremony on February 21, 2019 in Lawrence, KS. A memorial gathering to celebrate her life is being planned. In lieu of flowers, the family would appreciate donations to HIAS, Amnesty International, or any charity reflecting her humanitarian ideals.

Hedwig "Hedy" Reeds passed away peacefully at Bishop Spencer Place on February 19, 2019 in Kansas City, MO. She was 95. Ms. Reeds was born on March 26, 1923 in Vienna, Austria to Markus and Stella Neumann. She had a large extended family in... View Obituary & Service Information

The family of Hedy Reeds created this Life Tributes page to make it easy to share your memories.