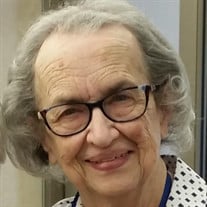 Helen Brooks, a lifelong resident of Kansas City, passed away peacefully at Village Shalom on Feb 2, 2020. Funeral services will be at 1:30p Tuesday, February 4, 2020 at The Louis Memorial Chapel, 6830 Troost Avenue with burial to follow at Kehilath Israel Blue Ridge Cemetery. She was born in St. Vincent’s Hospital on June 17, 1929 to the late Maurice and Anna Horowitz and was the eldest of three children. She attended Central High School, and after, enjoyed working at Harzfeld’s Downtown. She and Herb “Herby” Brooks were married in January of 1949, and began their life together by raising their family in Prairie Village. With two boys and a girl in tow, Helen was a whiz at being a wife, mother, and homemaker. She was very social, taking part in sisterhood at Temple Beth El and Beth Shalom Synagogue, and for her children volunteered as grade school room mother, brownie leader, and often opened their home for the kids’ youth group functions. Helen always enjoyed retail, whether she was shopping or working at a number of shops and boutiques, among them The Nassau Shop at Ward Parkway, Harzfeld’s and Catherine’s at Metcalf South, or Keleher’s at Ranch Mart. One of her most enjoyed pastimes was baking, and at that she was absolutely phenomenal. Never a day went by where there wasn’t a cake, cookie, or brownie ready to eat in the kitchen. Helen is survived by her son, Joel Brooks, and daughter and son-in-law Meri Ellen Brooks-Taylor and Nigel Taylor. She leaves behind nieces Nancy Carl (Larry), and children Steven, Anna, and Sara; and Pamela Glickman (Ted) and daughter Sydney, all who lovingly cared for her as they would their own mother/grandmother of blessed memory. Others who will miss her dearly are nephew Paul Kotelov (Stacy) of Highland Park, Illinois, and children Ari, Eli, and Noah; her sister-in-law: Shirlee Horowitz, Pasadena, CA; her “California” nephews and niece Larry, Rick, Scott, Pam, and Mike; nephew Mickey Kirschenbaum and nieces Marde Randall and Devra Wathen. She is preceded in death by her husband Herbert “Herby” Brooks, her son Michael Brooks, sister and brother-in-law Sylvia and Irwin Kotelov, and brother Nathan “Nicky” Horowitz of Pasadena, California. Special thanks are due to Helen’s caregiver Camille Mullings of Everyday Home Care, whose company was invaluable and whose care and compassion extended far beyond the usual. The family wishes to extend immeasurable gratitude to the entire staff at Village Shalom—from the administration to the facilities management to the medical team—for the devoted and loving care they gave our mother during her residence there. In lieu of flowers, in Helen’s memory, the family suggests donations to Village Shalom, the American Heart Association, or the Alzheimer’s Foundation.

Helen Brooks, a lifelong resident of Kansas City, passed away peacefully at Village Shalom on Feb 2, 2020. Funeral services will be at 1:30p Tuesday, February 4, 2020 at The Louis Memorial Chapel, 6830 Troost Avenue with burial to follow at... View Obituary & Service Information

The family of Helen Brooks created this Life Tributes page to make it easy to share your memories.

Helen Brooks, a lifelong resident of Kansas City, passed away...