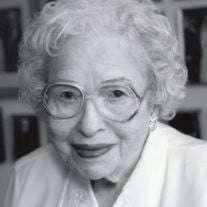 Helen Shapiro, 105, of Overland Park, KS, passed away Friday, February 28, 2014 at Village Shalom. Graveside services were held Friday at Mt. Carmel Cemetery. In lieu of flowers, the family suggests contributions to Village Shalom, Congregation Beth Shalom Lechem Committee or Kansas City Hospice and Palliative Care. Helen was born September 2, 1908 in Kansas City, MO, the daughter of Wolf and Pearl Lena (Karol) Glazer. She was a legal secretary for Cohen, Schnider, Shamberg & May Law Offices for 26 years before her retirement in 1978 at age 70. Helen began working in 1952 following her husband’s death. Prior to this she was a homemaker raising her children Audrey, born in 1938 and Bill, born in 1945. Helen was a current member of Congregation Beth Shalom and was a longtime member of Kehilath Israel Synagogue. She was described as a woman of valor – a modest, strong willed, passionate parent and grandparent. Helen was a woman of few words, but they were always from her heart. She had tremendous integrity. Her examples were shown by her deeds, not just her words. Her dedication was to her family. Her life revolved around raising all the generations of her family, always putting herself last, although she deserved to be first. Helen was preceded in death by her parents; her husband of 15 years, Bernard Herbert Shapiro; brothers, Morris, Lou, Jay and Ben; sisters, Mina, Bertha, Fannie and Ruth; grandson: Binyamin Greenblatt. She is survived by her son and daughter-in-law: William and Joyce Shapiro, Overland Park, KS; daughter and son-in-law: Audrey and Martin Greenblatt, Jerusalem; many grandchildren, great-grandchildren and great-great-grandchildren. The family would like to thank the staff and care givers at Village Shalom where she lived since 2006. They are truly caring and dedicated people who deserve the highest praise for what they do. Also high praise should go to Kansas City Hospice that helped her through her final days.

The family of Helen Shapiro created this Life Tributes page to make it easy to share your memories.