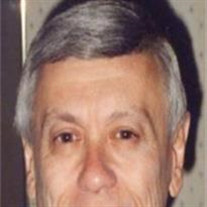 Herbert Adler, 84, of Leawood, KS, passed away Tuesday, August 13, 2013 at St. Luke’s Plaza Hospital. Funeral services will be at 3:00pm Thursday, August 15, at The Louis Memorial Chapel, 6830 Troost Avenue, Kansas City, MO 64131 with burial to follow at Rose Hill Cemetery. In lieu of flowers, contributions can be made to The Nelson-Atkins Museum of Art, 4525 Oak St., Kansas City, MO 64111; New Reform Temple, 7100 Main, Kansas City, MO 64114; Hyman Brand Hebrew Academy, 5801 W. 115th St., Overland Park, KS 66211 or a charity of one’s choice. Mr. Adler was born July 23, 1929 in Kansas City, MO, the son of Samuel and Mabel (Levy) Adler and was a lifelong area resident. He served in the U.S. Air Force, in Intelligence, and served in Thule, Greenland. After his military service, Mr. Adler began his career with Hallmark, working in many different capacities within the company, and was with them for over 55 years before his retirement in 2011. Mr. Adler served on the board of directors for Shalom Plaza and the Jewish Geriatric Center, which then became Village Shalom, of which he was instrumental in raising funds for the new campus. Most recently, he volunteered at the Village Shalom gift shop. He was a member of and past board member of the New Reform Temple, where he was instrumental in the formation and activities of the Social Action Committee. Mr. Adler was also a former member of The Temple, Congregation B’nai Jehudah where he also taught Sunday School. He was preceded in death by his parents and a brother, Alvin Adler and his aunt, Irene Levy. Mr. Adler is survived by a niece, Jan Renner; his lifelong friend, William A. Buschling; his dogs, Baron and Sebastian and many devoted friends.

The family of Herbert Adler created this Life Tributes page to make it easy to share your memories.