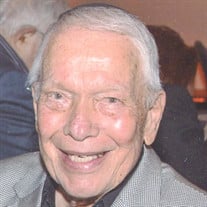 Herbert Fishman, 90, of Overland Park, Kansas peacefully passed away on Wednesday, December 28, 2016, at his home. Funeral services will be at 1:00 pm on Friday, December 30, 2016, at the Louis Memorial Chapel, 6830 Troost, Kansas City, Missouri, with burial at Kehilath Israel Blue Ridge Cemetery. In lieu of flowers, the family suggests contributions to Kehilath Israel Synagogue, Village Shalom or a charity of donor's choice. Herb was born in Philadelphia, Pennsylvania on February 5, 1926. He attended high school in Philadelphia, and joined the Air Force in 1943. Herb served in WWII as a flight engineer on a B-29. After the war, Herb met his future wife, Beverly, at a USO dance in Kansas City. He and Beverly were happily married for 66 years. Herb started his working career as a salesman at the Palace Clothing Company in Kansas City, Kansas, and ultimately became the owner of his own clothing store, Michael Scott Clothing in Mission, Kansas. After the clothing business, Herb started a new career as a commercial real estate investor and developer. He was the co-founder of Fishman and Company Realtors, Inc in Olathe, Kansas along with his longtime partner, Ross Stiner. Herb enjoyed a long and successful career as a real estate investor before retiring in 1988. During his retirement years, Herb was an avid but high handicap golfer as a member of Meadowbrook Country Club, but his true passion was boating at the Lake of the Ozarks and later, in Aventura, Florida. Herb was a life-long fan of the KC Royals, serving as a charter member of the Royal Lancers, and of the KC Chiefs serving as an original member of the Red Coaters. Herb was a long time member and supporter of KI Synagogue, and a member of the ROMEO's. Herb's most favorite times were sitting on his boat while sipping a martini. All his many friends are sure that if there is a boat in heaven, he'd be the captain. Herb is survived by sons and daughter-in-law, Michael and Marlene Fishman, Leawood, Kansas, and Scott Fishman, Overland Park, Kansas; grandchildren Erin Fishman and husband, Ben Federlein, Kansas City, Missouri; Jennifer and Justin Kaufmann, Kansas City, Missouri; and his beloved great grandchildren, Cleo, Sabine, and June Federlein, and Leah and Harrison Kaufmann. The family would like to thank Herb's devoted care-givers, Louise Schmidt, Toni Hunt, Tom Hawley, Kandis Reynolds, JoAnn Harris, and friend, Sandy Czarlinsky.

The family of HERBERT FISHMAN created this Life Tributes page to make it easy to share your memories.