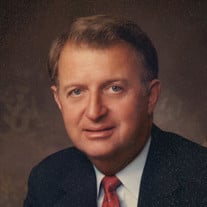 Herbert Roy Jacobson passed away Friday, August 1, 2014 in Rancho Mirage, California. A funeral will take place at 10:30 a.m., Tuesday Aug. 5 at The Louis Memorial Chapel; 6830 Troost Ave. Burial will follow at Rose Hill Cemetery. Herb was born to A.D. and Dora Jacobson in Kansas City, Missouri. He attended Southwest High School and earned his Bachelor of Science, Mechanical Engineering from the University of Illinois. After graduation in 1950, Herb returned to Kansas City to join the family construction business, A.D. Jacobson Company, which was founded by his father in 1919. Herb and his brother Elliot ran the business together for 37 years, and grew it into a highly respected, nationally recognized contracting company. Herb served as local chairman of the labor negotiating committee for 12 years and was president of the Kansas City Contractor chapter. Herb was then invited to be an active director of the national Mechanical Contractors Association of America (MCAA), serving as a board member, treasurer and National President. During his tenure as President, Herb traveled extensively throughout the country speaking to local chapters and spent time in Washington advocating the issues that guided his industry. An active and involved participant in Kansas City’s charitable and business worlds, Herb contributed his time as President of Beth Shalom Synagogue and President of Jewish Vocational Services. He was a partner in the original group that brought the Kings Basketball team to Kansas City. After leaving business, Herb and his wife retired to Palm Springs, California where he immensely enjoyed traveling, bridge, golf, tennis, family, and life. He was a member of Tamarisk Country Club, Har-El Temple, and a supporter of Jewish Federation of the Desert. Herb is survived by his wife of 64 years, Loreen, his son Craig and daughter-in-law Lynn, son Tom and daughter-in-law Susan, daughter Patty; and his six grandchildren, Lucy and her husband Nathaniel, Andrew and his wife Nathalie, Austin and her fiancé Adam, Hannah, Hillary and Matthew. The family has requested that in lieu of flowers, contributions be made to the charity of your choice.

The family of Herbert R. Jacobson created this Life Tributes page to make it easy to share your memories.