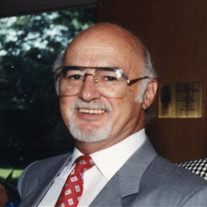 Herbert (Herbie) Mendelsohn, 88, of Overland Park, KS, died Monday, April 4, 2016, after stoically battling Parkinson’s disease for 15 years, at his home with his 3 girls and Alice at his bedside. Funeral services will be at 1:00 p.m. Thursday, April 7, at The Louis Memorial Chapel, with burial to follow at Rose Hill Cemetery. In lieu of flowers, the family suggests contributions to the Friends of Barb Mendelsohn Charitable Fund, to fund research for Mitochondrial Myopathy, in care of The Jewish Community Foundation of Greater Kansas City, 5801 W. 115th St., Overland Park, KS 66211. Herb was born January 3, 1928 in Chicago, Illinois. After graduating from high school, he joined the Marines and then moved to Kansas City where he lived for the remainder of his life. He spent his life in the commercial lighting maintenance business, first as Sun Ray Lighting Company and later as Sunshine Lighting with his son-in-law Jeff Altman. Always in the service business and admired by all, he started the national lighting association group, NALMCO which is now in its 63rd year. He was a longtime member of The Temple, Congregation B’nai Jehudah and later of Congregation Beth Torah. Herb had many interests which included piloting his own plane. His passion was for all aspects of horse racing, from ownership to handicapping. For years you could find Herb at Ak-sar-ben in Omaha. Dad bowled with B'nai Brith and was a founding member of Meadowbrook Country Club where he loved to play cards and golf with friends. Herb was a Kansas City Royals enthusiast and season ticket holder since their inception. Herb was a devoted husband, father, grandfather, and great grandfather. He was preceded in death by his wife of 57 years, Annice, in 2008 and sister, Adele Horn. Herb is survived by his three daughters and sons-in-law: Roberta (Rick) Intrater of San Francisco, California, Sharon (Jeff) Altman and Barbara Mendelsohn both from Overland Park, Kansas; grandchildren: Tracy Altman (Overland Park, KS), Dr. Brian Altman (Boulder, Colorado), Brandon and Alana Intrater (Mill Valley, California), John and Emily Intrater (Larkspur, California) and Evan Intrater (New York, New York) and great-grandchildren Emma, Jack and Paige. He is also survived by his brother, Leon (Sue) Mendelsohn of Chicago, Illinois and many nieces and nephews. We are forever grateful to Alice Williams, his devoted caregiver, companion, and friend for the last 8 years. Herb was greatly loved and his jokes will be missed by all.

Herbert (Herbie) Mendelsohn, 88, of Overland Park, KS, died Monday, April 4, 2016, after stoically battling Parkinson&#8217;s disease for 15 years, at his home with his 3 girls and Alice at his bedside. Funeral services will be at 1:00 p.m.... View Obituary & Service Information

The family of HERBERT (HERBIE) MENDELSOHN created this Life Tributes page to make it easy to share your memories.