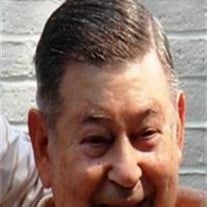 Herbert M. Rope, 89, of Kansas City, MO passed away Sunday, June 9, 2013.Graveside services and burial will be at 1:00pm Wednesday, June 12 at Rose Hill Cemetery. Kindly omit flowers. The family suggests contributions to The Temple, Congregation B’nai Jehudah or a charity of the donor’s choice. Herb was born May 26, 1924 in Kansas City, MO, the son of Frank and Julia Rope. After graduating from Paseo High School, he attended the University of Missouri, where he was a member of Sigma Alpha Mu fraternity. He enlisted in the Army Air Corps and returned to his studies after the war ended. While home on Spring Break from MU, his future Mother-in-Law, Sonia Hoffman, asked son Irwin to invite his good friend Herb over for dinner. Her daughter Corinne was home on Spring Break from the University of Wisconsin. Home for winter break several months later, Herbie ran into her at Diamond’s Jewelry store in downtown Kansas City. He called her that night and invited her to go see Morrie Amsterdam at the Terrace Grill at the Muehlbach. At first she wasn’t interested in getting serious, but that changed. They got engaged on her 19th birthday and married that August. He then went on to complete his law degree from UMKC School of Law. Herb practiced law in Kansas City for 55 years, many of those alongside his father. He was a longtime member of The Temple, Congregation B’nai Jehudah where he served as an officer. Herb was an avid golfer, loved to play tennis, aerial darts and fish. He was a member of the Optimist’s Club, the Elmers and in his later years enjoyed going to the ROMEOs luncheons. One of his biggest thrills was when his father once asked him to drive Harry Truman to the weekly poker game at Oakwood Country Club. Herb is survived by his wife of 65 years, Corinne, of the home; sons and daughters-in-law: Doug and Judy Rope, Clif and Stacy Rope, all of Overland Park, KS, Brad and Lesley Rope, Rancho Palos Verdes, CA; grandchildren and their spouses: Lauren Rope (Denver, CO), Jennifer and Michael Stroik (New York, NY), Justin and Erin Samuel (Denver, CO), Lauren Bess Samuel (Chicago, IL), Adam Rope (Redondo Beach, CA), Remy Rope (Scottdale, AZ), and Danielle Rope and David Rope (Overland Park).

The family of Herbert Myron Rope created this Life Tributes page to make it easy to share your memories.