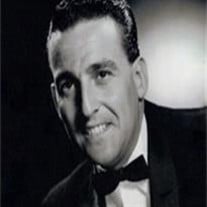 Herb Taubin, 80, died July 21, 2009 at his home in Overland Park, Kansas surrounded by his loving family. Funeral service will be held on Friday, July 24 at 11:00 a.m. at Mount Moriah Funeral Home located at 10507 Holmes Road in Kansas City, Missouri. In lieu of flowers, the family suggests memorials to Herb’s favorite charities, American Stroke Foundation and American Cancer Society. Mr. Taubin made his living selling wholesale clothing but his passion was as a “charity auctioneer” raising millions of dollars for medical research over the years. Herb’s career as an auctioneer started in the early 50’s with the American Medical Center of Denver, a cancer research and care hospital. Through word of mouth, he was approached by a multitude of charities over the years and never found it within himself to say no. He helped to raise literally millions of dollars over a period of more than 50 years. The Johnson County Gala raised over 8 million dollars in a 21 year period for the American Cancer Society. The long list of other charities that Herb raised money for were: Marillac Center for Abused Children, Menorah, Baptist, Mercy and Shawnee Mission Hospitals, Alzheimer’s Foundation, ALS, The Dream Factory, Cystic Fibrosis, The Heart Association, The Youth Symphony and many more too numerous to mention. Herb received many rewards over the years but he would be the first to say the best reward will be when the organizations he raised money for over the years are able to provide a cure for the diseases they are researching and trying to eliminate. He was preceded in death by his parents and five siblings. Those left to cherish his memory are former spouse and friend, Joan; son Mitchell and his wife Dawn; son Scott and his wife Debbie; son Jeffrey and his wife Cari; and six wonderful grandchildren, Kendall, Lacey, Nikki, Cory, Tova and Titan. Survivors also include a host of devoted nieces and nephews and many friends.

The family of Herbert S. Taubin created this Life Tributes page to make it easy to share your memories.