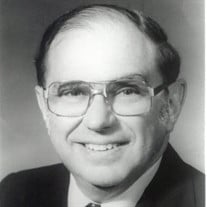 Herman F. Mondschein of Overland Park KS, passed away at February 13, 2016 at home surrounded by his loving family. Funeral services will be held Wednesday, February 17, 2016 at 2:00 P.M. at Louis Memorial Chapel, with burial in Kehilath Israel Blue Ridge Cemetery with full military honors. Memorial contributions may be made to the Lechem Fund of Congregation Beth Shalom or a charity of one’s choice. Herman volunteered as a Private in the U.S. Army Air Corps on July 1, 1941, became an aviation weather forecaster and rose to the rank of Master Sergeant with the 8th Air Force in England during World War II, helping to provide weather service for fighter aircraft combat operations. He left the service as a Warrant Officer in December 1945, served in the Missouri Air National Guard as a 2nd Lt., 1946-51 and was recalled to active duty in 1951-52 during the Korean War. At Scott AFB, IL he helped provide weather service for air evacuation of soldiers wounded in Korea. He also prepared and delivered air safety weather lectures to Senior and Command Pilots, for which he received several Letters of Commendation for their quality and effectiveness. After 40 years of active duty, National Guard and Reserve service, he retired as a Lt. Colonel in 1981. As a civilian he was a hydrologist with the U.S. National Weather Service (NWS) for 32 years, retiring in 1980 as the Chief, Hydrology Division of the NWS’ 14-state Central Region. From 1972-79 he was Hydrologist in Charge (HIC) of the River Forecast Center (RFC) in Kansas City, and from 1962-72 it’s Deputy HIC. The office provided flood predictions and other water-related services to all or parts of 15 states. The office and staff were often recognized for valuable flood predictions. He was awarded the U.S. Dept. of Commerce Gold Medal in 1969, and the NOAA Public Service Award for the NWS in 1976. He was the U.S. Dept. Commerce Alternate Commissioner on the Missouri and Upper Mississippi River Basin Commissions. He held life memberships in the Reserve Officers’ Assoc., Military Officers’ Assoc. of America, National Assoc. of Retired Federal Employees, and the 8th Air Force Historical Society. He was a member of the 339th Fighter Group Assoc. (WW II), Air Weather Assoc. and the 8th Air Force Heritage Museum. He was a member of the Jewish War Veterans of the U.S., and was on the Board of Directors of the Jewish Veterans Museum at the Jewish Community Campus in Overland Park, KS. He was a member of B’nai B’rith, and in Washington D.C., the U.S. Holocaust Museum and the WWII Memorial. He was a member of Kehilath Israel Synagogue and Congregation Beth Shalom, where he was a former member of its Board of Directors, was a co-chair of its Lechem (bread) Comm., which provides hot meals to thousands of impoverished people annually at a “soup kitchen” in KC, KS. He also served in the Sisterhood Gift Shop and served as treasurer of the Video Comm., the Grocery Project fundraiser and Hesed Comm., providing gifts and cheer to nursing home residents. He was also Co-Chair of the High Holiday fundraiser. In 1993 Beth Shalom honored him with its Kovod Award for “distinguished service rendered our congregation,” and in 2001 he was awarded the only Honorary Life Membership ever given to a male by the Beth Shalom Sisterhood since it was established in 1915. Herman attended City College of N.Y. 1938-40, and served in its voluntary infantry ROTC unit. After WWII the GI Bill enabled him to receive a B.S. Degree in Meteorology in 1948 and a M.S. Degree in Meteorology and Hydrology in 1958, both from St. Louis University. He was born in NY City on May 27,1921, moved to St. Louis in 1946, and to Kansas City in 1962 and then with his beloved wife Dorothy - moved to a retirement community in Leawood in 2003. Herman was very deeply loved, and will be sorely missed. He is survived by Dorothy, his loving wife of 67 years of the home and his daughters Judy, Marsha and Marilyn, and surviving sons-in-law respectively, Jeff Selvin, Randy Stanard, and granddaughter Berkley Selvin. He is also survived by his sister, Frances and husband Dr. Melvin Frankel, of Riviera Beach, FL. All who feel his loss include his nieces, nephews, great nieces and great nephews, as well as many other family, friends and others whose lives he touched in a kind, friendly, helpful and positive manner. He was preceded in death by his parents, Moses and Molly Mondschein; father-in-law, Will Oshansky and mother-in-law Goldie Oshansky; brother, Dr. Sidney Mondschein and Judy’s late husband and son-in-law Danny Woodley. He always gave of himself, his very best to those he loved and those he met along the way. A first generation American son of Russian immigrants of the 1880’s, he served with devotion his beloved country, the United States of America, proudly and ably in its military and civil services. “Is anybody happier that you passed this way? Does anybody remember that you spoke to them today? The day is almost over, and its toiling day is through. Is there anyone to utter a kindly word for you? Can you say tonight in parting with the day that’s slipping fast, that you helped a single person of the many that you passed? Is a single heart rejoicing over what you did or said? Does the one whose hopes were fading, now with courage look ahead? Did you waste the day or use it? Was it well or sorely spent? Did you leave a trail of kindness, or a scar of discontent? As you close your eyes in slumber, do you think that God will say: You have earned one more tomorrow by what you did today?”....(from Dear Abby: ”Words to Live By”).

Herman F. Mondschein of Overland Park KS, passed away at February 13, 2016 at home surrounded by his loving family. Funeral services will be held Wednesday, February 17, 2016 at 2:00 P.M. at Louis Memorial Chapel, with burial in Kehilath Israel... View Obituary & Service Information

The family of HERMAN F. MONDSCHEIN, Lt. Col. USAF (Ret.) created this Life Tributes page to make it easy to share your memories.