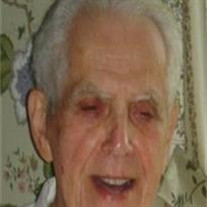 It is with great sadness that the family of Herman Schifman make his death known. He passed away in his home with dignity and in peace on Tuesday, December 6, 2011. Herman lived a good life. He was a lifelong resident of Kansas City, born May 27th, 1922 to Aaron and Celia Schifman. He spoke often of his wonderful childhood years at the family home in Kansas City with stories about sitting on the porch for meals with his extended family and, playing with neighborhood playmates. Herman loved music and being with friends for a card game or night out. He met his beloved Dorothy Price at the age of 18 at Paseo High School. Herman proudly served as Lieutenant in the Army Corp of Engineers in the South-East Asian theater during WWII, helping to build bridges for the Burma Road. He married Dorothy in 1945 after returning home. Herman was a loving family man, caring dearly for Dorothy and their 3 children, as well as for his extended family – Meyer, Morris, Ben, Dave, Rose and their families, as well as Dorothy’s brother Sam, twin sister Ruby and their families. Herman worked with his brothers and nephews at Schifman Printing company for almost 50 years. As his grandchildren arrived, they became central to his life as well. His granddaughter Lori would visit and record her grandfather’s stories that he loved telling and she loved hearing. He had many dear friends from throughout the Kansas City Jewish Community that were like an extended family. He was dedicated to Kehilath Israel Synagogue, teaching photography to KI teens, serving in the men’s club, and davening as often as he could. Herman and Dorothy traveled later in life, loving their adventures together and visiting their children. Herman was preceded in death by his wife of 49 years, Dorothy Schifman, who passed away in 1995. He was also preceded in death by all Schifman brothers and sister. He is survived by his children, Ed, Ron and Carol and their spouses Vicki, Sheila and David as well as his grandchildren Mike, Lori, Ben, Clara Rose, and his step-grandchildren Kale, Joel and Lane. With tremendous gratitude the family would like to thank Herman’s wonderful caregivers during the last years of his life: Mike Park, Kathleen Lincoln, Terry White, Paul Dantonio, Richard Prerszler, and Jean Henderson. You all provided Herman constant companionship, allowing him the ability to stay in his home. And to our dear family friend Jamie Ginsberg, steady and present. Forever thankful to all of you. Herman would help whomever he could, whenever a friend needed his attention – truly a Mensch, a fine human being. He strove to make people happy, to laugh. It is Herman’s wish that his family and friends follow in his footsteps -- be loving, be helpful, be optimistic. Enjoy. Shalom. You are missed. Memorials: Schifman Hunger Fund, Kehilath Israel Synagogue, 10501 Conser, Overland Park, KS 66212 - Harvesters Community Food Network, 3801 Topping Ave., Kansas City, MO 64129 - Alpha pointe Association for the Blind, 7501 Prospect, Kansas City, MO 64132 or a charity of one’s choice. Funeral services will be 10:15am, Friday December 9 at The Louis Memorial Chapel, 6830 Troost Avenue, Kansas City, MO 64131. Burial to follow at Kehilath Israel Blue Ridge Cemetery, 1901 Blue Ridge Blvd, Independence, MO 64052.

It is with great sadness that the family of Herman Schifman make his death known. He passed away in his home with dignity and in peace on Tuesday, December 6, 2011. Herman lived a good life. He was a lifelong resident of Kansas City, born... View Obituary & Service Information

The family of Herman Schifman created this Life Tributes page to make it easy to share your memories.

It is with great sadness that the family of Herman Schifman make...