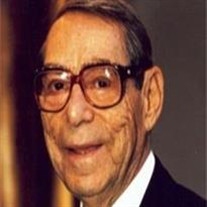 Herman Wasserman, 97, devoted husband, beloved father, and dedicated grandfather passed away peacefully at his home on Saturday, January 30, 2010. Funeral services will be held at 1:30 pm Monday, February 1 at The Louis Memorial Chapel, 6830 Troost Avenue. Burial will be in Rose Hill Cemetery. Kindly omit flowers, the family suggests contributions to a charity of the donor’s choice. Mr. Wasserman was born on March 28, 1912 in St, Joseph, MO. He was raised there and later married his loving wife of 63 years, Florence. In 1953 they moved with their children to Kansas City. Herman graduated with a degree in journalism from the University of Missouri-Columbia. After initially working in advertising, he joined his father in the insurance business for what became a successful 60-year career, both in St. Joseph and Kansas City. He received numerous awards and recognition in the industry. Herman was a 32nd degree Mason, a member of the Ararat Shrine and The Temple, Congregation B’nai Jehudah and its Brotherhood for over 50 years. He was preceded in death by his loving wife Florence in 2003; son: Michael Wasserman; brothers: Max and Earl Wasserman. He is survived by son and daughter-in-law: William and Pauline Wasserman, Kansas City, MO; daughter and son-in-law: Cynthia and Arthur Liebenthal, Leawood, KS; daughter-in-law: Eileen Wasserman, Los Angeles, CA; grandchildren: Jennifer Liebenthal, Kansas City, MO, Adam Liebenthal, Boston, MA, Jake and Victoria Wasserman, Boston, MA, Sara Wasserman, Somerville, MA. The family appreciates caregiver Kathy Ganther’s 15 years of loving care and attention. The services provided by Kansas City Hospice are also greatly appreciated. Herman will be dearly missed by his children, grandchildren, nieces, nephews, and many friends.

The family of Herman Wasserman created this Life Tributes page to make it easy to share your memories.