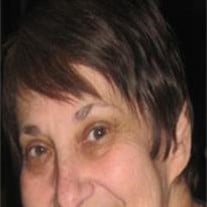 Hilary M. Lewis, 62, of Prairie Village, died December 18, 2009 at Kansas City Hospice House, after a prolonged illness. The funeral services will be held 11:00 am Monday, December 21 at Congregation Beth Torah, 6100 W 127 St, Overland Park. Burial will be at Mt. Moriah Cemetery. In lieu of flowers, the family requests donations to the Hilary Lewis Memorial Fund, which is being established at the University of Kansas Hillel Foundation, 722 New Hampshire, Lawrence, KS 66044, to support that organizations's Shabbat programming, or to the charity of the giver's choice. She was born Hilary Marcia Louis, March 4, 1947, in Kansas City, MO, and lived in the Kansas City area most of her life. She held a bachelor’s degree in education from Northwest Missouri State University and a master’s degree in Jewish Studies from the University of Missouri at Kansas City. After teaching elementary school for a few years, she began the career which would occupy her for over thirty-five years as a Jewish educator. She served as principal of the religious schools of Congregation Har Hashem in Boulder, CO, and Temple Beth El in Overland Park, KS, and was instrumental in organizing the United Religious School and its successor organization, the Community Religious School, which combined the religious-school programs of congregations representing various branches of Judaism, and she served as principal of both of these. For the past twenty-five years she held various positions in the educational programs of the Jewish Federation, as Director of School Services and director of the teachers’ resource center, where she both planned programs and worked one-on-one with Jewish educators throughout the community. She also served as a consultant for the religious school of the Lawrence Jewish Community Center. Along with her other jobs, she was principal of the Community High School of Jewish studies, an evening program which brought together students from the entire metro area, a position she held until her death. Hilary was a talented educator who was respected throughout the entire Kansas City Jewish community. She had a gift for creativity and problem solving and made every person she worked with feel important and valued. She was passionate about children, teachers, and Jewish learning and believed that almost anything could be an educational opportunity. From the students she directly taught to the teachers she advised and trained to the schools she ran, Hilary impacted countless lives and multiple generations. She was also a talented artist, specializing in Jewish-themed gel-pen drawings. She was a member of Congregation Beth Torah. She enjoyed taking cruises and was an avid reader. In recent years, her favorite activity was spending time with her grandchildren. She is survived by her husband of forty-two years, Stuart Lewis, of the home; son and daughter-in-law Jay and Kimberly Lewis, of Overland Park; son and daughter-in-law Craig and Jennifer Lewis, of Irvine, CA; mother Marilynne Rosenthal, of Overland Park; sister and brother-in-law Joan and Arnold Kort, of Overland Park; sister and brother-in-law Judy and Jed Sederholm, of Katy, TX; brother and sister-in-law Michael and Teresa Rosenthal, of Overland Park; grandchildren Mckenna, Keaton, and Eden Lewis; and several nieces and nephews.

The family of Hilary M. Lewis created this Life Tributes page to make it easy to share your memories.