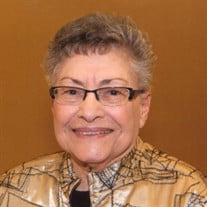 Hortense Rae Haith, 89, died March 8, 2016. Funeral Services will be 1:00pm Thursday, March 10th at The Louis Memorial Chapel, 6830 Troost Avenue with burial following at Rose Hill Cemetery. In honor of her memory contributions may be made to Village Shalom or to an organization of one’s choice. Hortense was born September 19, 1926, in St. Louis, Missouri, to Sam and Rose Keller. Hortense had three brothers, Phil, Sanford and Frank Keller. Her mother died when she was 5 years old, and due to hard times Hortense moved to Kansas City when she was 13. She was raised by her mom’s sister Bertha Rainen and her husband Jack Rainen, also known as Aunt Bert and Uncle Jack. She graduated from Southwest High School in 1944, and she married Joseph Haith on December 1, 1946. Joe and Hortense were married for 62 years and he was the love of her life. Joe called her “HR” but she was officially known as HRH “Her Royal Highness”. Joe and Hortense were the cutest couple and enjoyed going to Royals, Chiefs, and KU Basketball games. They were regulars at the Missouri Repertory Theatre. They also enjoyed many travels together and with their family. From her apartment at Village Shalom, Hortense could see the American Flag and wondered why there wasn't an Israeli flag waving also. She came up with idea to honor her husband Joseph by dedicating a Flag of Israel and pole in his memory. On Sunday, August 9, 2015 at 11:00 am, the Flag of Israel was unveiled after a beautiful ceremony at Village Shalom with her family, friends and members of the Jewish War Veterans who raised the flag in loving memory of Joseph J. Haith. Hortense was a life time member of Hadassah, a member of The Temple, Congregation B’nai Jehudah, former member of Kehilath Israel Synagogue and a past member of Meadowbrook Country Club. She was an excellent cook and had Passover Dinner at her house every year along with countless family meals and celebrations. The family would like to thank Christine Lawson, Jill Craft, and all the caring staff at Village Shalom. The family would also like to thank Dr. Don Cohen and all the doctors and staff at Menorah Medical Center and Rabbi Arthur Nemitoff for their compassion, concern and friendship. Hortense, is survived by her brothers Phil, Sanford, and Frank Keller, by her sons: Larry Haith (Randi), Myron Haith (Linda), her daughter Rosalie Haith; grandchildren: Amy and Peter Shapiro, Erin and Ben Nathan, Zac Haith, Joshua Haith, Jaclyn Haith, Zane Haith, Ben and Janina Conley, Jason and Rebecca Conley; great-grandchildren: Sophie Shapiro, Emma Shapiro, Eli Nathan and Maya Nathan. To all of the grandchildren and great-grandchildren, Hortense was always known as “Nani”. Hortense had a wonderful sense of humor, loved to laugh and enjoyed life. May her memory be a blessing for her family and to all who loved her.

Hortense Rae Haith, 89, died March 8, 2016. Funeral Services will be 1:00pm Thursday, March 10th at The Louis Memorial Chapel, 6830 Troost Avenue with burial following at Rose Hill Cemetery. In honor of her memory contributions may be made... View Obituary & Service Information

The family of HORTENSE RAE HAITH created this Life Tributes page to make it easy to share your memories.