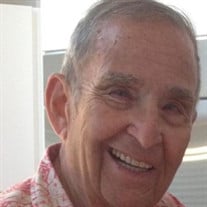 I.I. (Izzy) Ozar, 93. Loving husband, father, grandfather, great-grandfather, brother, uncle, and friend passed away peacefully on July 30 in his home in Overland Park, Kansas. He was born to Simon and Sadie Ozar in Kansas City, Missouri, and raised by Sarah “Auntie” Ozar. He graduated from Paseo High School. Izzy enlisted in the United States Army during WWII. He was stationed in the Philippines and served under General MacArthur. Upon his return from the war, Izzy graduated with a Law degree from UMKC. Izzy met the love of his life Lesly Klein, of Omaha Nebraska, in 1957 and they were married soon after. They spent years raising their three children, golfing, and traveling the world together. Izzy’s career spanned many decades as an attorney and businessman in the greater Kansas City area. As an attorney, Izzy practiced bankruptcy and real estate law and also sat on the bench as a city judge. Izzy was very active in the democratic political scene. He was President Jimmy Carter’s local campaign manager for the state of Missouri, as well as involved in many other local political campaigns. Izzy became involved in banking and real estate, helping to revitalize the downtown Kansas City Community. A common thread throughout Izzy’s life was helping others. He was an advocate for the Jewish community and his selfless personality was always giving – giving time, attention, and resources to children associations, Jewish charities, veteran associations, numerous shelters, and anyone else who needed help. He had a love for music, rhymes, and family. He was an avid sports enthusiast, supporting all the local KC teams. Izzy’s trademark was to always have a cigar in his jacket pocket, and more recently a scratch ticket or two. He is survived by his wife of over 61 years Lesly, children, Leonard Ozar, Stephanie and Adam Elyachar, Lisa and Nicolas Hughes, as well as grandchildren, Jared Ozar and Chaleena Urban, Jonah Elyachar, Sarah Elyachar, and great-grandson Kingsley Ozar. Izzy was a family man. He was preceded in death by his sister Dorothea and Nathan Jagoda, his brother Dr. Milton Ozar, and brother-in-law Lewis Bratt. He is survived by his sister Edith Bratt, sister-in-law Marilyn Ozar and many countless nieces, nephews, and many close friends. The family gives special thanks to Dr. Donald Cohen and his staff, and all of the loving care from his caregivers. Izzy was an unforgettable man, he was caring, generous, and kind. I.I. truly stood for intelligent and irresistible. He will be forever loved and missed. May his memory forever be a blessing. A private family service will be held Sunday, August 2nd. In lieu of flowers, memorial donations can be made to the Alzheimer’s Association, Jewish Federation Service, or the charity of one’s choosing.

The family of I.I. Izzy Ozar created this Life Tributes page to make it easy to share your memories.