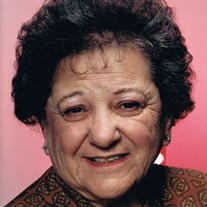 Ida “Baubie” Applebaum, 95, passed away peacefully on Sunday, September 28, 2014 at Menorah Medical Center. Ida was surrounded by her caring family and passed peacefully after a long and rich life experience on earth. For the last 35 years she was known as “Baubie” to most family, friends and acquaintances, some did not even know her as Ida. Funeral services are at 1pm Tuesday, September 30, 2014 at The Louis Memorial Chapel, with burial at Sheffield Cemetery. If you wish to make donations in her honor, the family requests they be made to The American Heart Association, Congregation Beth Torah or a charity of your choice. Ida “Baubie” was born November 24, 1918 in Grodna, Poland to Jacob and Helen Kurash and was the oldest of 3 children. She left the work world after marriage to Alex Applebaum in 1949 and devoted her full energy to raising and taking care of her family. Participating in her son’s school activities and such organizations as Hadassah, Marcella Rodin Club and the Sisterhood of Congregation BIAV. She loved to take care of her family and home, mowing the grass, taking care of the home, bargain shopping and giving advice. In later years she enjoyed taking trips with her family to family celebrations, Las Vegas, New York and the Caribbean. Ida was preceded in death by her parents, her husband Alex and her brother Eugene Kurash. Survivors include sons Victor (Adrianne) and Richard (Sheri), sister and brother in law Rosalie and Richard Kalmar, grandchildren Jeremy and Liron Applebaum, Amy Applebaum, Michael Applebaum, Joshua and Lindsay Applebaum, Lexie and Curtis Smith and great grand children Elliana Applebaum and Jack Applebaum. The family wishes to thank Doctor Donald Cohen, Doctor Elizabeth Dang, The staff of the Atriums and Villa St. Joseph for bringing great comfort and excellent care to her and extending her life to 95+ years.

Ida &#8220;Baubie&#8221; Applebaum, 95, passed away peacefully on Sunday, September 28, 2014 at Menorah Medical Center. Ida was surrounded by her caring family and passed peacefully after a long and rich life experience on earth. For the last... View Obituary & Service Information

The family of Ida "Baubie" Applebaum created this Life Tributes page to make it easy to share your memories.