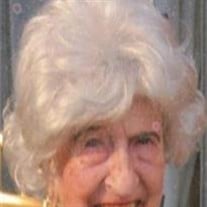 IDA ROSE LUKE “SKIPPER” FEINGOLD - SKIPPER Feingold was a fixture in the Kansas City educational community for most of her 92 years. She passed away peacefully at home May 28, 2012. Funeral services will be held Wednesday, May 30th at 2:00 PM at the Jewish Community Center Campus, 5801 W. 115th St., Overland Park, KS 66211, in the Lewis and Shirley White Theatre, with burial to follow at Mt. Carmel Cemetery. In lieu of flowers the family would suggest contributions to either Village Shalom, the Heritage Center Art Department of the Jewish Community Center or Beth Shalom Synagogue. Skipper was born June 20, 1919, to David and Sarah Saferstein Luke in Kansas City, Missouri. From an early age she displayed a propensity for teaching and made it her life’s passion. She began teaching Sunday School at Beth Shalom Synagogue when she was 15 years old. That began a career with the synagogue that spanned 66 years, including head teacher for over 25 years. Her work there greatly influenced the religious education and lives of many families. A graduate of Central High School at the age of 16, she went on to get her degree in education from the Kansas City Teacher’s College and upon graduation went to work in the Kansas City, Missouri Public School System at Switzer school. During the Passover holiday in the spring of 1942 she attended a party for servicemen stationed at Fort Riley, Kansas. There, she met Leo with whom she had three dates before he was transferred overseas. While Leo was in the European Theatre of Operation, Skipper went to New York to get her Master’s Degree in Literature from Columbia University. At the end of World War II she had her degree and a husband as well. Beginning in the late 1940’s, Skipper began 40 years with the Jewish Community Center as a camp director. She helped develop Camp JeCoCe (an acronym she coined taking the first two letters from Jewish Community Center), Funtime, Barney Goodman Camp, Skipper’s Headquarters and Adventureland. Thousands of children learned to swim, dive, play sports and just have fun under her direction. Skipper was an authority on early childhood development and authored five books which she used when she taught courses at Kansas City Kansas Community College, Avila University, and at the many workshops she conducted both locally and throughout the country. She helped start the Headstart program in Kansas City, Kansas. For the last 10 years of her life, Skipper was an active resident of Village Shalom and participated in many programs. She began and taught a course in the Yiddish language, and did several seminars on puzzle solving, all of which were thoroughly enjoyed by her fellow residents. Just recently she was the first resident to write a blog that shared many important aspects of her life. Skipper was a positive and forceful influence on the entire community and countless people benefited from her love and devotion to education. She was predeceased by her parents, her husband of 65 years, Leo, brother Yudell and sister-in-law LaVerne Luke and granddaughter Blakely Kay. She is survived by her sister and brother-in-law Zelda and Andy Reiz; her children, Anita and Chas Goldsmith, Bari and Ed Pollyea, David Feingold and Trudi Galblum, Buzzah and Lisa Feingold and Micah Feingold and his partner Cindy Laufer. Skipper also leaves her grandchildren, Tara and Cory Elbaum, Marisa and Mickey Cavuoti, Matthew and Lauren Goldsmith, Dan and Jessica Pollyea, Sarah Pollyea and her partner Josh Henry, Andrea and Ilan Napchan, Erika and Javier Velasquez, Chad and Kim Feingold, Zac and Jessica Feingold, Emily Feingold, Carly and Mark Hustvedt, Jamie and Steve Murphy, Adam Galblum, Caite and Brian Gilmore, and Suzanne Galblum and fiancé Austin Dicken. Great- grandchildren are Mia, Avi, Marley, Nate, Eliza, Sadie, Leo, Tessa, Ada, Lila, Max, Levi and Zoe. We would like to give a special thanks to her caring physician Dr. Donald Cohen, her friends, companions and caregivers, Shirley Logan and Teresa Rodriguez, Pat Newson, Renee DonCarlos and the other wonderful caregivers at Enhanced Home Care. Love and teach, life’s true endeavors Your lessons learned, we will remember.

IDA ROSE LUKE “SKIPPER” FEINGOLD - SKIPPER Feingold was a fixture in the Kansas City educational community for most of her 92 years. She passed away peacefully at home May 28, 2012. Funeral services will be held Wednesday, May 30th at 2:00 PM... View Obituary & Service Information

The family of Ida "Skipper" Feingold created this Life Tributes page to make it easy to share your memories.