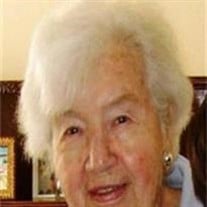 Ilsa Cole, age 96, of Overland Park, Kansas was born in the home of her maternal grandparents on May 8, 1916 in Germany and grew up in Geilenkirchen, near Aachen. She graduated Valedictorian of her high school class, was an accomplished track and field athlete, and was thought of as an extremely smart and beautiful woman. Had the Nazis not prevented Jews from participating, she would have tried out for the Olympics and attended a university to study archaeology. With her aspirations thwarted, she pursued a career in dress design. Ilsa met her future husband, Walter J. Cole, at the birthday party of her grandmother. With no path to a safe and normal life in Nazi Germany, Ilsa and Walter decided together to emigrate to The United States of America. With great foresight they obtained visas and passage to America before Kristallnacht. When it occurred, they were still able to depart for the U.S. They arrived in November of 1938, after celebrating their first Thanksgiving aboard the U.S.S. Manhattan. They were married in 1940 in St. Louis. Husband Walter was drafted into the American Army and stationed in Greeley, Colorado where he served as an interpreter of German Prisoners of War. Their eldest daughter Carol was born in Greeley. After World War II they returned to St. Louis, where their second child Ann was born. They relocated to Kansas City in 1950 where Walter subsequently went into his own wholesale floor covering business, WJ Cole Floor Products. Ilsa, who was great with numbers, did the company’s books and helped her husband. In 1958, Ilsa gave birth to a son, Steve. Ilsa was an accomplished bridge player, lifelong member of Congregation B’nai Jehudah and, member of the National Council of Jewish Women, Hadassah, and the Nelson Atkins Museum of Art. She enjoyed classical music performances, painting, and embroidery and was an accomplished seamstress. To promote tolerance and fight anti-Semitism, Ilsa made presentations to students throughout the city in which she recounted her life story, including her exodus from Germany, as one of the first speakers for the Midwest Center for Holocaust Education. One of the great joys of her life was her seven grandchildren and eight great grandchildren. With the largest part of her immediate family lost in the Holocaust, it was the reestablishment of her own extended family with children, grandchildren, and great grand children plus their spouses and families that prompted her to say more than once, that she had “won her own personal victory over the Nazis”. Ilsa was fiercely independent, only begrudgingly moving to independent senior living. Then with a setback in health, she moved to Village Shalom at age 93 where she lived until passing away Tuesday, October 30, 2012. Ilsa was preceded in death by her husband Walter J. Cole. She is survived by her three children and their spouses, Dr. Carol Kleinman and her husband Wayne Pines, Ann Baum and her husband Kenneth Baum, and Steven Cole and his wife Beth Cole; her brother, Erich Dahl; grandchildren Ellie Kleinman and Mark Zaid, Alex Kleinman and Dr. Masha Naydich, Rachel Loeb and Zach Block, Emily Loeb and Dr. Lee Hammons, Jeffrey Cole, Kevin Cole, and Lauren Cole, Great grandchildren: Olivia, Natalie, Anya, Charlie, Solomon, Walter, Hannah and Sam. Funeral services will be held Sunday November 4 at 2:00 PM at The Louis Memorial Chapel. Shiva services will be held at the Village Shalom at 7:00 PM that evening. The family request’s no flowers. Donations in Ilsa Cole’s memory may be made to The Midwest Center for Holocaust Education, 5801 West 115th Street, Suite 106, Overland Park, KS 66211-1800.

Ilsa Cole, age 96, of Overland Park, Kansas was born in the home of her maternal grandparents on May 8, 1916 in Germany and grew up in Geilenkirchen, near Aachen. She graduated Valedictorian of her high school class, was an accomplished track... View Obituary & Service Information

The family of Ilsa Dahl Cole created this Life Tributes page to make it easy to share your memories.

Ilsa Cole, age 96, of Overland Park, Kansas was born in the home...