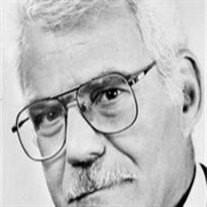 March 22, 2012 Ira H. Rakley, 85, Leawood, passed away March 22nd, 2012. Graveside services and burial were March 25th, 2012 at Waldheim Cemetery, Forest Park, Illinois. In lieu of flowers the family suggests contributions to Kehilath Israel synagogue or Village Shalom. Ira lived in the Kansas City area for much of his adult life. He was born in Chicago, Illinois where he grew up and attended college at the Illinois Institute of Technology. A veteran of World War II, Ira served in the Army in the Philippines and Korea. Ira met his wife of 60 years, Miriam (Shimberg) Rakley in 1950 at a rooftop dance in Chicago. Ira was involved with the Overland Park Police Department for many years. In the 1970’s he served as a reserve officer and was twice cited for valor. Trained as an industrial engineer, Ira’s true avocation was his work as a private investigator. He was a founding member of the Kansas Association of Private Investigators. Ira was a Mason, a member of the Scottish Rite, and active in the Masonic lodge for many years. He also enjoyed fishing, and shooting. An avid photographer, Ira enjoyed taking pictures and spending time in his home darkroom, developing and printing his own photographs. Passionate about his Judaism, Ira was a regular member of the Kehilath Israel daily Minyan for a number of years. He was also a volunteer for the chevra kadisha. Ira was preceded in death by his parents Harry and Rose, sister, Muriel Matin and brother Ted. He is survived by his loving wife of 60 years, Miriam; daughter and son-in-law, Barbara Rakley and Sunil George, Evanston, IL; Daughter Susan, Chapel Hill, NC; son and daughter-in-law Stuart Rakley and Nancy Friedman, New York, NY; sister-in-law and brother-in-law, Roz and Marvin Friedman, Banning, CA; sister-in-law Joan Rakley, Los Angeles, CA; grandsons, Brian and Ben Judge.

The family of Ira Herschel Rakley created this Life Tributes page to make it easy to share your memories.