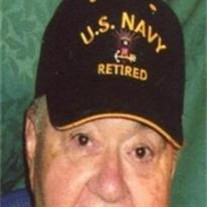 Irving T. Cohen, 84, of Overland Park, KS, passed away Sunday, March 20, 2011 at Overland Park Regional Medical Center. Graveside services will be at 1:00pm Wednesday, March 23, at Rose Hill Cemetery. Kindly omit flowers. The family suggests contributions to The Temple, Congregation B’nai Jehudah, 12320 Nall, Overland Park, KS 66209 or to the ROMEOS. Mr. Cohen grew up in Brooklyn, NY and came to Kansas City to be with his childhood sweetheart, Elaine Sircus, whom he met when they both were 14. They were married in 1948. That same year, he went to work for his father-in-law in the family business, Braemoor Women’s Suits and Coats, as an outside salesman. After several years, he went to work in jewelry sales with both Helzberg’s and Zales, staying at the latter as manager until he retired in the late 1990’s. Mr. Cohen was a longtime member of The Temple, Congregation B’nai Jehudah, and was a member of the Jewish War Veterans and the ROMEOS. He was preceded in death by his parents, Harry and Jennie (Solomon) Cohen. Mr. Cohen is survived by his wife of 63 years, Elaine Cohen, of the home; daughter and son-in-law: Lynne and Steven Valenziano, Greenwood, MO; son and daughter-in-law: Mitchell and Bonnie Cohen, McKinney, TX; sister and brother-in-law: Florence and Leonard Kercheff, Dallas, TX; grandsons: Anthony Valenziano, Greenwood, MO; Andrew Cohen, McKinney, TX; great-grandsons: Joseph Valenziano, Greenwood, MO and Richard Valenziano, Paris, TN. He loved to fish, boat and camp and he and Elaine went on several cruises mostly in the Caribbean. Irving had many very close friendships. He had a great sense of humor, enjoyed telling a good joke, but most of all, he always wanted the best for his family. He will be greatly missed. The family would like to thank the staff at Delmar Gardens, especially Debbie Meyers, for their loving care.

The family of Irving T. Cohen created this Life Tributes page to make it easy to share your memories.