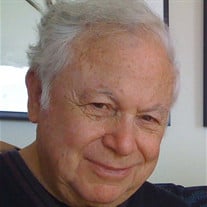 Irwin Joseph Blitt, 89, of Leawood, Kansas and Emeryville, California, died Tuesday, October 24, 2017. He is survived by his wife Rita Blitt; daughter Chela (Connie) Blitt and granddaughter Dorianna Blitt, Berkeley, California; sister and brother-in-law Joan Mae and Jerry Bayer, Northbrook, Illinois; brother-in-law and sister-in-law Paul and Bunni Copaken, Mission Hills, Kansas. Memorial services will be held at 11:30 a.m. Thursday, October 26, at the Lewis and Shirley White Theater of the Jewish Community Campus, 5801 West 115th St., Overland Park, Kansas. In lieu of flowers or food, please consider a donation in his honor to the Jewish Family Services of Kansas City (JFS) Food Pantry or to the Jewish Community Campus. Both are located at 5801 West 115th St., Overland Park, KS, 66211. Irwin was born June 22, 1928, to the late Anne and Michael Blitstein in Chicago, Illinois. He attended the University of Illinois at Champagne-Urbana, where he earned a bachelor’s degree in business. He met the love of his life, Rita Copaken, at Illinois and they were married in 1951. After graduation, he moved to the Kansas City area, where he began working in real estate for his future father-in-law Herman Copaken. The firm eventually became Copaken, White and Blitt; he partnered with his brothers-in-law Lewis White and Paul Copaken. Irwin was considered one of the founders of the shopping mall industry. He was involved with developing numerous projects across the country and developed millions of square feet of office and retail properties throughout Kansas City including Oak Park Mall, Bannister Mall, and Indian Springs Shopping Center. The Blitts were one of the families that donated the land where the Jewish Community Campus now sits. He was instrumental in developing the building, which opened in 1988, and served on the Jewish Community Campus board of directors, serving a term as its president. The Jewish Community Campus changed the face of the Jewish community. Irwin facilitated the inclusion of most of the major Jewish agencies in the area and they continue to call the Campus their home. He was also a driving force in the addition of the Lewis and Shirley White Theatre to the Campus in 2005. Family always came first to Irwin and the happiness of his daughter, granddaughter, nephews, nieces and others was always paramount in his life. Whether it was a family matter or a business matter, and sometimes the two merged together, he always dedicated the time that was needed as he was a extremely patient and caring listener. He and Rita had a lifelong loving partnership. He encouraged her career as an artist and together they supported the arts and a variety of charitable causes. In recent years they spent much of their time in the San Francisco Bay Area in order to be close to their daughter Chela and help raise their granddaughter Dorianna.

The family of IRWIN J. BLITT created this Life Tributes page to make it easy to share your memories.