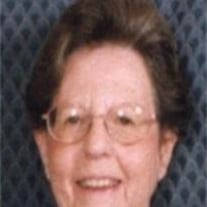 A golden light was extinguished with the passing of Isabelle Rae (Friedman) Fremerman on Thursday, May 12, 2011 at the age of 81. The mother of three and grandmother of seven, her life was built around family and her many friends who shared with her a keen interest and love for the arts and cultural endeavors. She enjoyed visiting museums, seeing movies and theater productions, and attending lectures. Isabelle graduated from Paseo High School and later in life, at the age of 44, graduated from Washington University in St. Louis. For many years she was a medical secretary and office manager for Dr. Arnold Schoolman. Isabelle was an avid traveler. Whenever possible, she participated in scheduled group trips and fully enjoyed setting foot in foreign lands. Known for her artistic abilities, among them crewel and beading, she instilled in her children a love and appreciation for those things that endow our world with beauty and remain a testament of each person’s contribution. She was a loving wife, mother, grandmother, sister, aunt and friend to many. She leaves a daughter, Paula Becker and her husband, Steve Becker, a son, David Fremerman and his wife, Devarati Rastogi and another son, Donald Fremerman. Her seven grandchildren are Steven, Stephanie and Sarah Rubin, Priya and Eisha Fremerman, and Netanya and Simcha Fremerman. Her sister, Sylvia Stone, survives her along with many nieces and nephews. She was preceded in death by her husband, Stanley Fremerman, parents, Arthur and Minnie Friedman, sister, Ruby Fleider, and grandson, Michael Rubin. The family would like to extend their appreciation and gratitude for the wonderful care she received from Hospice Advantage, especially Kirsten Parker, RN, Kasi Johnson, CNA and Patti Woodhead, CNA, HHA. The family would also like to extend a very sincere thank you to her caregivers, Jennifer Stone and Beth Oberman, who cared for her during her last few months. Isabelle was a woman of infinite strength, compassion and generosity. Isabelle’s memory shall be a blessing forever. In lieu of flowers the family suggests memorials be sent Hospice Advantage, 6340 Glenwood Street, Suite 109, Overland Park, KS 66202; The Cancer Action Center, 10520 Barkley Street, Suite 100, Overland Park, KS 66212; Congregation Beth Torah, 6100 W. 127th Street, Overland Park, KS 66209; or a charity of one’s choice.

A golden light was extinguished with the passing of Isabelle Rae (Friedman) Fremerman on Thursday, May 12, 2011 at the age of 81. The mother of three and grandmother of seven, her life was built around family and her many friends who shared... View Obituary & Service Information

The family of Isabelle Rae Fremerman created this Life Tributes page to make it easy to share your memories.

A golden light was extinguished with the passing of Isabelle...