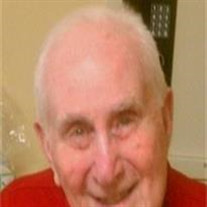 Isadore "Smiley" Bressel, 90, of Kansas City, MO, passed away Sunday, December 4, 2011 at Kansas City Hospice House. Funeral services will be at 12 noon Wednesday, December 7, at The Louis Memorial Chapel, 6830 Troost Avenue, Kansas City, MO 64131 with burial to follow at Mt. Carmel Cemetery. Kindly omit flowers, the family suggests contributions to Kansas City Hospice House or American Heart Association. Mr. Bressel was born in Kansas City, MO, attended Kansas City schools and attended 2 years of junior college. Smiley, before going to the Army, met his future wife, Marilyn Shankman. While serving in the U.S. Army, he attained the rank Sergeant. He fought in the Battle of the Bulge in WWII and was twice a prisoner of war. Returning to Kansas City after his service, over the years he worked in the amusement industry, a grocery store and a wholesale meat company. He then worked for Hantover Company from 1962 until his retirement in 2002. Mr. Bressel was a member of Congregation Beth Shalom and B’nai B’rith Lodge #184. He was an avid sports fan, was a great tennis player, loved golf, especially enjoying the friendship with his buddies. Mr. Bressel had a sharp wit and a great sense of humor and was a fan of old black and white cowboy movies. He was preceded in death by his parents, Jacob and Anna Bresel; his wife of 67 years, Marilyn Bressel, who died March 18, 2011; and a sister: Mollie Rosenberg. Mr. Bressel is survived by his son: Jerold Bressel, Overland Park, KS; sisters: Marian Poker, Long Island, NY and Shirley Blank, Green Bay, WI; granddaughters: Jenna Bressel, Chicago, IL; Ashlee Bressel, Kansas City, MO; Brooke Bressel, Chicago, IL and Ali Stark, Chandler, AZ. His greatest love was his family, his wife Marilyn, his son and his grandchildren. The family wishes to thank the staffs at Kansas City Hospice House and The Sweet Life for all their wonderful care.

The family of Isadore "Smiley" Bressel created this Life Tributes page to make it easy to share your memories.