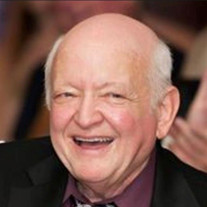 Ivan Edward "Eddie" Kramer, 73, of Prairie Village, Kansas, died Tuesday, April 14, 2015. Funeral services will be held at 12:00 Noon, Sunday, April 19 at The Louis Memorial Chapel, 6830 Troost Avenue. Interment will be at Rose Hill Cemetery. Kindly omit flowers. The family suggests contributions to the charity of your choice in memory of Eddie. Eddie was born June 9, 1941 to the late Harry Kramer and Rose Berz Kramer, in Kansas City, Missouri, and in 1955 moved to Prairie Village, Kansas. He was in the first graduation class from Shawnee Mission East in 1959. He received a degree in Electrical Engineering from the University of Kansas, and his MBA from UMKC. Eddie worked for the Bendix Corporation--now Allied Signal Aerospace--from the moment he graduated from KU, and retired at age 50. Eddie was truly one-of-a-kind. He never had a mean word to say about anyone, and he was always generous, loving, and ready to help anyone in need. He was a lifelong member of The Temple, Congregation B'nai Jehudah. He also was an avid collector, and was especially passionate about carnival glass. Consequently he was not only a very active member of HOACGA (Heart of America Carnival Glass Association), but also served many years as an officer of that club, and has so many dear friends from HOACGA. Though he will miss this year's HOACGA Convention, he will be there in spirit. Eddie was not a traveler, but he did spend considerable time at his vacation home in Henderson, Nevada, and lots of time in Chicago visiting his family--consequently, he gathered many friends in both locales. Everybody that had the privilege to meet this man, loved him. Eddie was preceded in death by his mother, Rose Berz Kramer, and his father Harry Kramer. He is survived by his sister and brother in law, Linda Kramer Silber and Marty Silber of Chicago, Illinois and Henderson, Nevada, his niece Bari Silber Fleischer (Avi), and his "honorary" family, Pam and Jerry Sinovic, and their children Matthew Sinovic (Stephanie), Ryan Sinovic (Claire), and Sarah Sinovic Sanford (Kevin). Eddie will be terribly missed, but will remain forever in our hearts.

The family of IVAN EDWARD "EDDIE" KRAMER created this Life Tributes page to make it easy to share your memories.