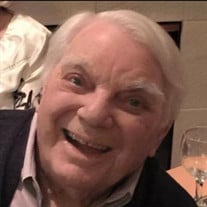 Our precious dad, Jack Miller, passed away on September 22, 2020 surrounded by his family. Jack was an amazing man. No one could know a kinder, more loving soul. He modeled what it meant “to bloom where you are planted.” His positive outlook on people and life was remarkable. Jack was often the sunshine in the room that brought people together. Jack was born January 25, 1924 in Lexington, Missouri to Ida and Samuel Miller, the middle child of three. He attended Wentworth Military Academy in Lexington through college and joined the Army at the start of WW2. As a second lieutenant he was injured by an explosion in France, sending him home. He married Freda Rose Siess, his fireball wife, on April 16, 1950. Jack made his way into the clothing business with his brother Melvin in Richmond, Missouri before they founded Miller’s Department Store in Olathe, Kansas. Jack, always great at connecting with others, was known to keep Bazooka gum in his pocket for every young adult that visited the store. They eventually established King of Jeans, a successful jean and clothing store chain for many years. Jack worked hard to support his family yet also found time to enjoy golf and bowling. He was an avid bridge player and continued to play several times a week with his many friends in his later years. Jack was a Shriner, a member of Congregation B’nai Jehudah and the Romeos. When he finally moved to Village Shalom Assisted Living Center, he was informally known among residents as “The Mayor” of Village Shalom, always greeting others with a smile and conversation. While at Village Shalom, he would routinely wait by the door at 7am to ask if he was needed to make a minyan. He is predeceased by his wife Freda Rose Miller, his parents Ida and Samuel Miller, his brother Melvin Miller, and his sister Jeanette Wayne. Jack was blessed with four children: Sheila Karpin (Danny), Alan Miller (Donna), Mark Miller (Marilyn), and Ellen Robinson (Irv). He has five grandchildren: Bret Gordon (Krista), Kevin Gordon, Lindsay Pfautsch (Eric), Jason Miller (Liz) and Alyson Selene Miller. He has 7 great grandchildren: Sarah Gordon, Josh Gordon, Caroline Gordon, Haley Pfautsch, Parker Pfautsch, and Emma Rose Miller. Jack also leaves behind his dear friend and companion of 12 years, Eileen Palder. Jack was fortunate to have long time relationships with step-grandchildren Heather Shachtman (Scott) and Kevin Karpin (Michelle) and Michael Robinson (Carrie) and Ashley Robinson (Scott). Jack had an amazing sense of pride for all his family and loved spending time with them. His children, grandchildren and great grandchildren were his light and joy. The mention of their names often brought a big smile and giggle and perhaps a story or two. Jack will be missed more than anyone can imagine. In his 96 years, he touched the lives of so many and showed others what it meant to love and live life fully. His kindness, beautiful sparkling blue eyes and smile will live forever in our hearts. In lieu of flowers, the family asks that you kindly direct donations to Village Shalom, Congregation B’nai Jehudah or Kansas City Hospice & Palliative Care.

Our precious dad, Jack Miller, passed away on September 22, 2020 surrounded by his family. Jack was an amazing man. No one could know a kinder, more loving soul. He modeled what it meant &#8220;to bloom where you are planted.&#8221; His positive... View Obituary & Service Information

The family of Jack Miller created this Life Tributes page to make it easy to share your memories.