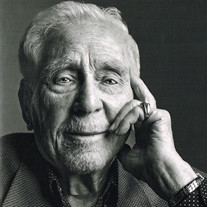 Jack Sokolov, 104, passed away peacefully in his favorite chair on Monday, August 5th at Village Shalom, in Overland Park, Kansas. Jack was born April 25, 1915 at home to Hyman and Bess Sokolov, who were both immigrants from Russia. He was the middle child of 2 sisters, Frances and Rose, and grew up attending KC schools. He was an outstanding student and an accomplished violinist. He was on the Debate Team, the Tennis Team and graduated Manual High School in 1932 as salutatorian. Unfortunately, the Great Depression interrupted his plans to go away to college. Instead, Jack found odd jobs during the day and attended K.C. Junior College and Rockhurst where he took courses in accounting and commercial law. His first full-time job was with the Union Pacific Railroad. Several years later, he began working as an accountant at Ready Mix Concrete Company. It was during this time that he met and married Bessie (Medov) a medical technician. They were married in 1940 and within a short time they had 3 daughters, Carole, Linda and Hedda. Having been shaped by his Depression experience, Jack was bound and determined to be in control of his financial future so that his children would never have to set aside their educational goals. In 1944, Jack and his father-in-law, Louis Medov, bought an auto parts and salvage business in Leavenworth, Kansas, and Jack and Bess’ family moved to Leavenworth. For almost 5 decades Jack grew the business into a successful enterprise, finally retiring in 1987, turning the business over to his son-in-law, Bernard Ellis, and moving back to K.C. During their 43 years in Leavenworth, Bess and Jack built a rich and fulfilling life in the community. They loved to travel, play golf and participate in the activities of their children. Jack was on the zoning commission, the Board of Leavenworth Country Club, a member of the Lion’s Club, a Mason and a Shriner. He also served as President of the Kansas Chapter of B’nai Brith and was a founding member of Meadowbrook Country Club in Overland Park, KS. One of Bess and Jack’s most satisfying opportunities was to serve as the civilian sponsors to over 24 Israeli officers and their families who, over the years attended the Leavenworth Command and Staff College. Jack and Bess’ retirement years back in KC were satisfying as well- filled with golf, carpentry, cooking, family and handling his own finances on the computer to the very end. His time was only marred by the death of his wife of 73 years, Bess in 2013. He is preceded in death by his wife Bess, sisters: Frances Schlozman and Rose Alisky. He is survived by his daughters: Carole (Bernard) Ellis, Linda (Kalman) Kaplan and Hedda Winetroub; grandchildren: Bailee (Ryan) Greenhaw, Mark Ellis, Heather (Ty) Weatherly, Jared Kaplan, Stacy (Steve) Brown; great-grandchildren: Jaxton Weatherly, Miller and Hunter Brown, Elia and Riley Ellis and Laila and Ivy Greenhaw; sister-in-law: Rheatha Winnick and brother-in-law: Morton Mann. A special thanks to caregivers: Kim, Virginia, Robert, Christine, Natasha and Tereza, who made Jack’s life more comfortable in his last years. Funeral services will be 9:30 am Thursday, August 8, 2019 at The Louis Memorial Chapel, 6830 Troost Ave, Kansas City, MO 64131. Burial to follow in Mt. Carmel Cemetery. In lieu of flowers, the family suggests contributions to Children’s Mercy Hospital or a charity of one’s choice.

Jack Sokolov, 104, passed away peacefully in his favorite chair on Monday, August 5th at Village Shalom, in Overland Park, Kansas. Jack was born April 25, 1915 at home to Hyman and Bess Sokolov, who were both immigrants from Russia. He was... View Obituary & Service Information

The family of Jack Sokolov created this Life Tributes page to make it easy to share your memories.

Jack Sokolov, 104, passed away peacefully in his favorite chair...