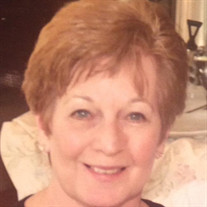 Jacqueline S. Friedman, our dear, beloved, mother, grandmother, sister, cousin and friend passed away peacefully at Menorah Medical Center in Overland Park, Kansas on December 9th, 2014 surrounded by her family. Funeral services will be 10:30am, Friday, December 12, 2014 at Louis Memorial Chapel. Burial will follow at Kehilath Israel Blue Ridge Cemetery. In lieu of flowers, the family suggests making a donation to Kehilath Israel Synagogue. Jackie was born on August 20, 1937 to Dora and Joe Adelman and was lovingly raised by her parents. She attended Kansas City, Missouri public schools and graduated from Paseo High School in 1954. During her high school years she volunteered as a "Candy Striper" at the local hospital. In 1956 she married Jack Friedman and their marriage blossomed. Together they provided a loving home for their family of three children. In 1977 she began working in the Goppert Family practice office at the Baptist Hospital in Kansas City Missouri. Here Jackie worked as a receptionist. Her love for people and her cheerful spirit made this job easy and fun for her. Jackie was well known throughout the hospital for her kind heart and she developed many wonderful and lasting friendships. Several years later the opportunity to work in the hospital pharmacy became available to her. She did not hesitate and began her career as a pharmaceutical technician which she enjoyed until her retirement in 2002. Jackie was always available to family and friends for advice, support and encouragement, and will be remembered and cherished for her love, commitment and generosity. Jackie was predeceased by her parents and brother, Mark. She is survived by her brother Bruce, children Patti, Ed and Ron, and her granddaughter Leona.

The family of Jacqueline S. Friedman created this Life Tributes page to make it easy to share your memories.