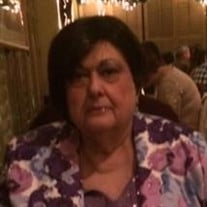 JACQUELINE ENGLANDER DAVIDSON July 10, 1943 – November 1, 2019 Jacki Davidson, originally born Jacqueline Kramer, was born on July 10, 1943 in the section of Brooklyn NY called “Hell’s Kitchen”. She passed away peacefully on November 1, 2019 at the Rose Estates in Overland Park. Jacki's parents were a Navaho Native American and a Jew. She was adopted on June 20, 1951 by Rose and Samuel Englander who met while students of Journalism at Columbia University in New York City. They lived in Yonkers, NY a suburb north of New York City. Samuel became head of Publicity at Yonkers and Roosevelt Raceways and Jacki loved to go with him to see the horses up close and personal. One horse had a mascot, a Dalmatian named “Inkspot or Inky”, and Jacki loved him like family. Jacki also developed a love for figure skating and every Sunday morning her wonderful Dad would drive her to the Westchester Figure Club where she learned to ice dance. In the summer of 1957, Jacki was all excited to go to a Figure Skating Camp in Canada but at the least minute her parents decided that it was too much money so she went to Bronx House Emanuel Camps in Copake NY. There was a meeting of the work campers (too old to be campers and too young to be counselors) one night and Michael noticed this cute girl who seemed to know many people there. The camp had been recommended to Michael by his cousin Maggie who was once Jacki’s counselor. Anyway, Jacki went out with 3 boys that summer and none of them were Michael. She did however, fall in love with Michael’s guitar playing and knowledge of folk music. Jacki’s mother became the food editor for the Herald Tribune, ironically because she was a terrible cook. She also became editor of Photoplay Magazine and one of the other magazines of McFadden Publications “Teens Today” wanted to do an article entitled “Great Parties Are so Darn Rare” so Jacki’s Sweet Sixteen Party was chosen and Michael was invited for his guitar. One summer Jacki worked as a Water Safety Instructor at Bronx House and Michael worked as a Folk Music counselor at another camp way up Caskill Mountain. Michael hitched a ride getting there but could not get one back and he walked all night for 26 miles up the mountain back to his camp .Two years later, after dating Jacki, Michael went off to the University of Wisconsin to study pre-Med. It did not work out due to his thinking of Jacki almost all the time and he left Wisconsin. After odd jobs he decided to become a professional cellist. He got into the Manhattan School of Music, got a call to play in the New Orleans Philharmonic and went there. When he came home, Jacki had asked about him and his mother told her about the New Orleans Philharmonic. So Jacki went to Michael’s Bachelor of Music recital and the following day went to the airport to see him off but arrived too late. Jacki then decided that she wanted to marry Michael and told everyone she was marrying him. So every few days another wedding present arrived from Bloomingdales, Saks Fifth Avenue, Lord and Taylor etc to their apartment on Bourbon Street which was not to Jacki’s liking to say the least. She found a place on Desire Street and Michael literally took the streetcar named Desire to work. That year the great conductor Arther Fieldler took the New Orleans Philharmonic on tour and Michael being the last cellist did not have to go so a friend lent Michael and Jacki a car and they went to the Gulf Coast on a pre-honeymoon. When the orchestra returned Jacki and Michael took the ferry to Gretna LA and got married by a Justice of the Peace. Then she got a rash and the doctors there thought it was Lupus but since they were getting married by a Rabbi they went to an allergist who said that Jacki was allergic to the “pollens and molds indigenous to the Mississippi River” and that she had to “get out of Dodge” so to speak. So Michael wound up in the Kansas Philharmonic. Jacki’s first job in Kansas City was as an ice skating instructor for the Kansas City Parks and Recreation department. One day she shooed some skaters off the ice who wound up being the Kansas City Blues minor league hockey team. Eventually, she found her calling as a Social Worker and worked at Independence Regional Hospital. She got fibromyalgia and won her disability hearing and retired. In her retirement, Jacki loved going to the Symphony, Opera and Ballet. Jacki is survived by her husband, Michael, and many friends who loved and will miss her. A memorial service will be held on Tuesday, November 12th at 3:30 pm in the Wesley Covenant Chapel on the campus of the Church of the Resurrection, 13720 Roe Avenue, Leawood, KS. In lieu of flowers, the family suggests contributions to any anti-gun violence organization of your choice. There will be a private ceremony where her ashes will be scattered, joining her mother’s at the Johnson County Memorial Gardens in the near future.

The family of Jacqueline "Jacki" Englander Davidson created this Life Tributes page to make it easy to share your memories.