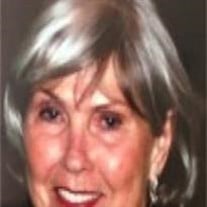 Jacqueline June Epsten, 83, of Kansas City, MO, died August 24, 2013 at St. Luke's Hospice House after an extended illness. A memorial service will be held at 11 a.m. on Tuesday August 27, 2013 at Congregation Beth Torah, 6100 W. 127th St., Overland Park, KS. Born in Des Moines to Harry and Margaret Gibson, Jackee attended East High School before studying at Iowa State Teacher's College. A job as airline hostess prompted a move to Kansas City in the early '50s. During her nearly ten year service with Braniff, she served as chief hostess and was chosen as their representative for the first Boeing 707 trans-continental flight from Seattle to Baltimore. On June 22, 1959, she married Robert N. Epsten (Bobby) and devoted her life to raising their five children. Her continued work for the airline provided the family the opportunity to travel internationally on several occasions. As corporate secretary for the family business, Major Brands, she fulfilled a strong supportive role. Her interest in art led to a BFA in painting at the Kansas City Art Institute. She had a strong connection to the Epsten Gallery at Village Shalom and where she served on the board. Along with her husband, she generously supported a variety of Jewish and community–wide philanthropic endeavors with a passion for causes related to the visual arts, performing arts and education. Jackee shared her friendship and nurturing love with so many. All will remember her sense of style, elegance, grace and charm. A member of Congregation Beth Torah and the New Reform Temple, she was preceded in death by her son, Todd Epsten, and her sister, Joyce Layman. Survivors include husband, Robert Epsten; children, Jane (Jonny) Girson, Brad (Ginny) Epsten and Jill Epsten, of Kansas City, and Judy (Bill) McLaughlin and daughter-in-law Sue McCollum of St. Louis. Her 12 grandchildren Sam, Michael, Josh, Maddie, Emma, Sarah, Brian, Justin, Hannah, Jonah, Maggie and Ben will miss the special love and individual attention of their Mama/Gammy. She is also survived by her sister, Janet Gehrke, of Chaska, Minnesota; brother, Skip Gibson, of Des Moines, nieces, nephews and dear cousins, Linda Carlin, of Chicago and David Leonetti of Honolulu. Donations in Jackee's memory can be made to The Epsten Gallery at Village Shalom.

The family of Jacqueline June Epsten created this Life Tributes page to make it easy to share your memories.