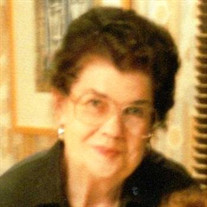 Jacquelyn “Jackie” (Edwards) Tucker, 88, passed away Thursday, January 1, 2015 at the Forum, in Overland Park, KS. Memorial services will be at 1:00 pm Thursday, January 8, at The Louis Memorial Chapel, 6830 Troost Avenue, Kansas City, MO to be followed by inurnment at Rose Hill Cemetery. The family suggests contributions to Grace Hospice. Jackie was born in Hope, North Dakota on October 4, 1926 to RL “Piney” and Doris Edwards. She graduated from the Fisher High school in Fisher, Minnesota. She later moved to Kansas City where she worked many years as an Executive Assistant at the VFW Headquarters. She married Dan Tucker in 1982 after a long courtship. Dan died in 2003. Jackie remained in their home until December of 2007 when she moved into The Forum in Overland Park. Except for a year between 2009 and 2010 Jackie lived at The Forum. She enjoyed bingo, music and her dogs Blue, Sassy, and Smokey. She also enjoyed sitting out in the lobby at The Forum where she would watch the activities of the day. She would appreciate it when her niece and nephew Roger and Vicky would bring their dogs for a visit. Jackie was preceded in death by her parents, brother: Duane Edwards; sister: Marilyn Thompson; and her husband: Dan. Survivors include her sister: Pat [Sherman] Tranby in Minnesota along with many nieces and nephews. Many family members reside in McIntosh, Minnesota. They will hold a memorial service in remembrance of Jackie on January 31, 2015.

The family of Jacquelyn "Jackie" Tucker created this Life Tributes page to make it easy to share your memories.