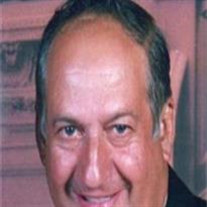 Jay Frederick (Fred) Frank, 70, of Overland Park, KS passed away Saturday, June 18, 2011. Funeral services will be held at 11:00am, Tuesday June 21st in the Yukon Chapel at Mt. Carmel Cemetery, Raytown, MO. Burial will immediately follow. Fred was born in Chicago and moved to the Kansas City area in his youth. Fred worked in the broadcast radio field for over 45 years. He was preceded in death by his wife of 43 years, Marian Frank, in 2005. Fred was an avid supporter of the Boy Scouts of America. He enjoyed barbecues with friends and family, most notably at his annual 4th of July gatherings. He was always on the go and enjoyed taking cruises with his family. Mr. Frank is survived by his daughter and her husband, Ronda and Tom Kennedy, Raleigh, NC; sons: Todd and Laurie Frank, Olathe, KS; Aaron and Christa Frank, Chicago, IL; sisters: Shirley Beiser, Stillwell, KS; Muriel and Gene Soloff, Overland Park, KS and 8 grandchildren. In lieu of flowers, the family requests that donations be made to the Boy Scouts of America - Heart of America Council, 10210 Holmes Road, Kansas City, MO 64131 or to a charity of your choice.

The family of Jay Frederick (Fred) Frank created this Life Tributes page to make it easy to share your memories.